Well, readers. As some of you may know I write a lot about beer. Being the intrepid reporter I am, I take my job seriously and am studious in coming to understand my subject matter.

Hence, you can be sure I drink a lot. 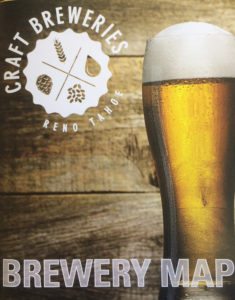 But fear not, my loyal denizens of the Internet. For it is not only super-professional-in-no-way-inappropriate reporters that get to indulge. I say to thee, nay.

For now, we have a brewery map!

Unlock the tools of whimsy and wonder in your mind for a moment and imagine if the map to Treasure Island were less about finding gold and more about finding glasses of golden-frothed liquid ready to be gulped.

Yes, my friends, dreams do come true if we only believe.

The City of Reno, Reno Sparks Convention and Visitors Authority (RSCVA) and the Nevada Craft Brewers Association (NCBA) have partnered up to help locals and visitors alike find their drink a little easier with their the inaugural unveiling of the Brewery Map, which offers not just a map (and awesome poster for your dorm room) to kick off your own personal pub crawl with your friends, but excellent mini bios on all of the breweries featured.

The unveiling was hosted by Brasserie Saint James on their second floor rooftop. The finger food consisted of handmade pizzas (my only regret is I didn’t eat more) and beers on tap from many of the brewers found on the map, plenty of whom were in attendance.

Representatives from the City, Reno Police Department, the Reno Fire Department (if my creepy staring did not lead me astray), RSCVA, NCBA, and damn near everyone else, were in attendance.

I know we like to joke around, dear readers. But we live in a fantastic city that continually redefines itself every day. How many cities in this country have the city government not just help facilitate something as cool as this map but show up just to have fun, drink a beer, and have some pizza? 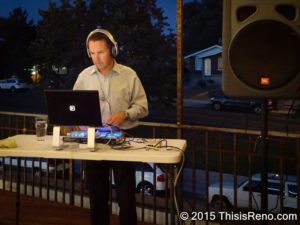 City Councilmember David Bobzien was there not as a representative of the government, but just a cool beer aficionado that was asked to come and guest-DJ. The man knows his music by the way.

Councilmember Naomi Duerr was there with her husband enjoying the ‘za (I’m from NYC, I can say it that way; you can’t).

Councilmember Oscar Delgado was absolutely cordial when I spoke with him. Not to mention he perhaps unwisely gave his cell number to the entire city during our brief interview (watch the video above).

Now there is a guy that cares about his city — and will get prank calls from me. I think I spotted the rest of the Reno City Council in the crowd.

No speeches, no ribbons, not removed from the community they serve in any way.

I got a chance to speak with Mayor Hillary Schieve, who maintained she promised not to do press that night. She then proceeded to talk to me about my articles — which to my utter shock she reads — and may be the coolest mayor in the history of anything.

We live in a city that has a treasure map for functional alcoholism and a government that likes to party with its constituents.

I love it here.