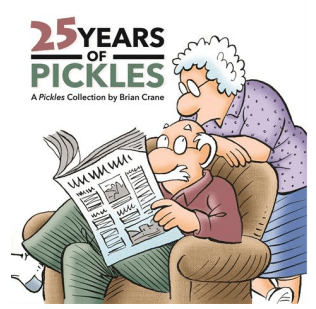 After twenty-five years of the beloved Pickles comic strips, it’s safe to say that Earl and Opal Pickles have aged well. In his seventh collection, 25 Years of Pickles, creator Brian Crane of Sparks shares some of his favorite strips and some of his earliest strips.

25 Years of Pickles showcases the wry, honest, and heart-warming connection between Earl, Opal, and the rest of the Pickles family, offering readers a chance to look back, even as Pickles continues to pick up momentum for the next twenty-five years of laughter.

Crane will be officially releasing the book Tuesday, October 13, at Sundance Books and Music, 121 California Avenue.

Brian Crane is the recipient of the prestigious 2013 Reuben “Cartoonist of the Year” Award. Pickles appears in over 900 newspapers worldwide and has been nominated twice for “Best Comic Strip.” Pickles received the honor in 2001. Crane lives in Sparks, Nevada, with his wife and they are the proud parents of seven children and thirteen grandchildren—with a fourteenth on the way.