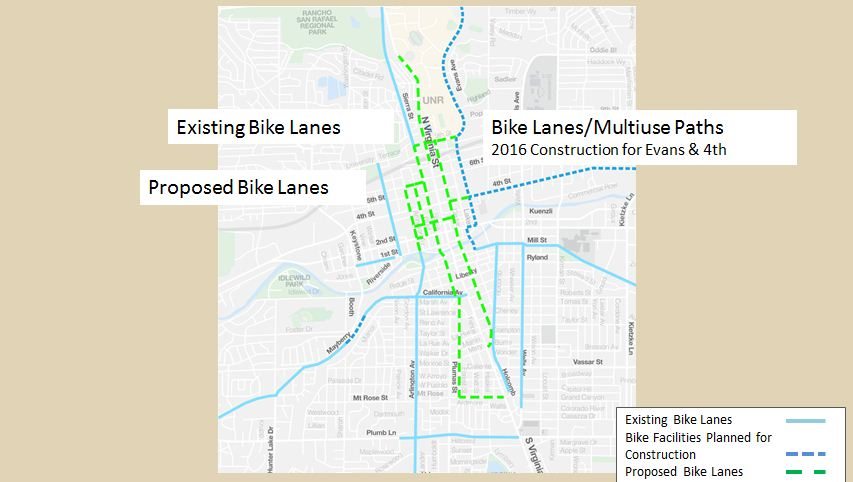 Bike lanes connecting Midtown to the university area are still a spot of contention, however. Bike advocates want to see bike lanes on Virginia Street and better bike connectivity with the university.

“We were very happy that RTC has been responsive to community feedback and has made a lot of improvements to their proposed design for South Virginia Street,” said Marlowe Kulley of the Great Streets Coalition. “The street design now has wide sidewalks with plenty of street trees that will make the district beautiful and enjoyable to walk, shop and dine. They are also limiting left-hand turns which will make the street safer.

“One aspect of the design we were disappointed with is the lack of bicycle connectivity between UNR, downtown and Midtown. There are currently no safe bicycle routes between the University and the Midtown shops, bars and restaurants, and that is a big shortfall for a city that is trying very hard to be a college town.”

“The design had bike ‘sharrows,’ where bikes and vehicles are meant to share the same lane, for most of south Virginia Street,” said Kulley. “This is a dangerous prospect for people on bikes because cars will be traveling much faster than the cyclists, and because the center turn lane is being replaced with a concrete median, there will not be enough space for vehicles to safely pass.”

RTC is proposing side-street bike connectivity with the university district, something the Reno City Council has asked city staff to look into as well.

He stressed that designs are still in the working stage.

“It’s important to understand designs are not finalized,” he said. “Unfortunately, the available space for improvements is more limited in the Midtown area.  The Reno City Council provided direction to move forward with, and further refine, the ‘option B plan’ specifically in regard to Virginia Street from Liberty to Vassar.

“The design presented to the public (Tuesday) night was intended to maintain consistently maximized sidewalks and was reviewed by the RTC Board (which includes representatives from the City of Reno) at its public meeting on August 21.”

Harrington said that final designs won’t be finished until next year, and current designs are only about 15 percent complete.

“I like what I am seeing in the latest draft, there are wider sidewalks, safer crossing areas and minimal strategic parking reductions,” she said. “Having things like trees, art and lighting are all really important to me, and I see accommodations for those as well.

“Some things I still need to see happen in the plans to make it really workable, a couple roundabouts and a continuous bike lane from south of Vassar to the proposed Center St. bike lane. I think addressing everyone’s needs is an important task and feel that RTC is up to the challenge.”