Home > News > Podcast > PODCAST: Who’s Going to Be the Next Pack Quarterback?
FeaturedNewsPodcastSports

PODCAST: Who’s Going to Be the Next Pack Quarterback? 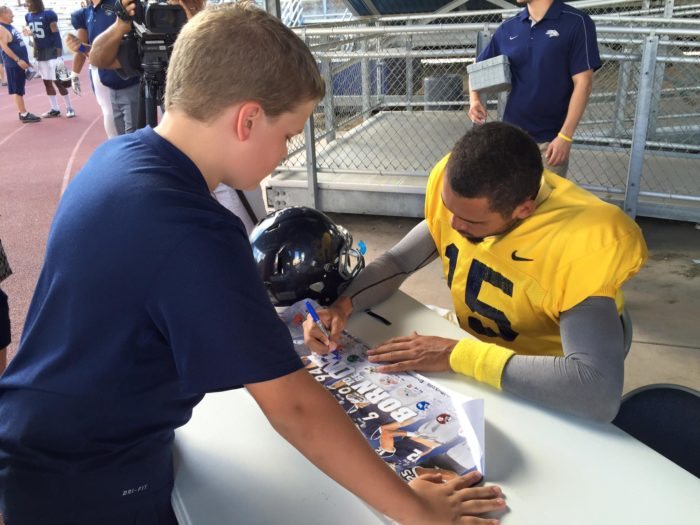 With approximately two weeks left until the start of the regular season the Nevada Wolf Pack held its Fan Appreciation Day this past Saturday afternoon, in front of nearly 600 fans at Mackay Stadium.

“I appreciate all the fans that came out today,” said head Coach Brian Polian, “We always look forward to the opportunity to hang out with some dedicated fans after the scrimmage. It’s a good change of scenery for our guys to be back at Mackay with fans out there – it amps things up a bit.”

As far as the overall scrimmage is concerned it doesn’t seem like the team is any close to naming a starting quarterback. Both quarterbacks Junior Tyler Stewart and freshman Hunter Fralick split reps with the first and second teams, both quarterbacks had their fair share of good plays and bad plays.

“We were far from perfect, but its practice 12, so we still have a long way to go. I’ll see the film and we’ll correct the Xs and Os, and then we’ll keep moving forward,” stated Coach Polian about his quarterback situation.

If we talk about the positives neither quarterback had a turnover which is something Polian stated as a huge factor on who will end up getting the nod. Stewart opened the scrimmage with the first team. He went 7-of-13 for 69 yards and a touchdown. He ran four times for 22 yards. Fralick was 7-of-12 for 61 yards and a score. Both led one touchdown drive and one field goal drive. Third-string quarterback Dante Mayes also led a touchdown drive.

The negatives on the day were the relationship between the offensive line and the quarterbacks. Fralick took a pair of sacks in the end zone for safeties. Stewart looked slow in the pocket as the right side of the line collapsed numerous times. Plus the quarterback center exchanges weren’t the crispest.

To the offensive line and the quarterbacks’ credit it was a hard competition to judge because a number of Wolf Pack offensive linemen were struck with the flu. So a number of starters didn’t suit up, leaving third-string right tackle Daren Echeveria running with the first team. The line did an excellent job despite their short comings opening up holes in the running game. The Wolf Pack rushed for 186 yards on 50 carries.

A few highlights on the day was the return of wide receiver Hassan Henderson. He made a number of key touchdowns grabs for both quarterbacks. Defensively, freshman linebacker Gabe Sewell had a team-high 7.5 tackles. Ian Seau had a sack for a safety and Nolan Dambacher had two sacks. Nevada didn’t force a turnover but didn’t allow a lot of big plays. Polian was pleased with the pass rush and the secondary, but not pleased with some big runs allowed.

Overall it was a tough scrimmage to judge. At this point it’s tough to really gauge anything. We have no idea who the quarterback will be. The offensive line wasn’t intact. The skill players showed up and played well. Right now we are still left with more questions than answers.  But the bright lining in all of this, Nevada is just a few weeks away from its season opener against UC Davis on Thursday, Sept. 3.

So one way or another all this camp drama will be behind us and we can get ready for the real gridiron action.