OPINION: Is The Great Basin Turning Into a Cinder Bowl?

The Ghost of Tom Joad

Lately, I have been studying the circumstances of the Dust Bowl. It’s not the first time I’ve bent my back to this task, but now I see things from a new perspective. I believe what George Santayana said is true, “Those who cannot remember the past are condemned to repeat it.”

The Dust Bowl happened at the nexus of global politics, agriculture economics, land disposition policy, the birth of mechanization, full on greed, and a limited understanding of the ecosystems that were being converted to crop agriculture.

In the midst of this socio-economic blender, honest, but uneducated folks looking for a way to make a self-sufficient living were taken advantage of by land speculators. Some of the real estate agents eventually spent time in prison for their deeds.

Simultaneously, much of the land was exploited by “suitcase farmers,” people who didn’t live on their land, but hired it farmed from faraway places. They were carpetbaggers.

These were the circumstances that lead to the Dust Bowl crisis.

If you told me to go make a plan that would maximize cheatgrass production, the only thing I would do differently is to completely remove livestock from western rangelands.

However, the basic cause was the imposition of an agricultural system on an ecosystem for which it was wholly unsuited. It took massive efforts on behalf of policy makers, scientists, farmers and stockmen, millions of tax dollars and labor, and more than two decades to mitigate the situation.

I still remember the residual dust storms of West Texas in the 1950s. The mitigation efforts were a resounding success. Crop agriculture is possible in the southern plains if conducted using methods that consider the characteristics of the ecosystem.

Today as I drive through the Humboldt Basin in northern Nevada, I see the ghost of Tom Joad pointing to the precursors of another ecological disaster. Some of the players are the same, and some of them like cheatgrass are new.

Cheatgrass is an annual grass native to Eurasia that was somehow introduced to the Intermountain West about a hundred years ago.

Cheatgrass has changed the game for everyone out here primarily because it has altered the fuels that carry range fires. Cheatgrass fueled wildfire has been identified as the number one threat to the sagebrush ecosystem.

Over the past 50 years, it has become dominant over millions of acres of sagebrush grasslands in the Great Basin. There is no one reason for its initial colonization; like other invasive species, it was a combination of factors including transportation corridors, wild and domestic animals, wind, water, and wildfire.

It has an incredible ability to dominate native-perennial grasslands once it arrives in a new area. After many years of speculation, the science is now telling us how we got to this point.

The grazing systems we have employed for decades in the Great Basin were developed for native perennial-grasslands without cheatgrass. They are perfectly good systems for the plant communities they were designed for.

Why does cheatgrass have such a competitive advantage over perennial grasses under these systems? It’s because the grazing systems actually protect cheatgrass from being grazed, leading to a buildup of carryover fuels from one year to the next.

It’s the big guy versus the little guy story retold, and we currently have a general public that is unaware.

Cheatgrass needs litter or ungrazed biomass to dominate. The more standing dead material you leave on the ground, the more cheatgrass you are likely to have.

Combine this with the environmental movement backed grazing reductions imposed by the Bureau of Land Management and U.S. Forest Service over the last 35 years, and you have a situation that has lead to the creation of the massive fires we have been experiencing over the past decade or so.

If you told me to go make a plan that would maximize cheatgrass production, the only thing I would do differently is to completely remove livestock from western rangelands. This would almost certainly speed up the process of cheatgrass takeover, but at the current rate it will achieve the same end.

Fires will become more frequent and greater in size until the entire Great Basin ends up as a “Cinder Bowl.”

Let’s compare some of the players of these two Bowls. Ranchers, like the Dust Bowl farmers, are attempting to make an honest living off the land. They are constantly conforming to changing rules set forth by federal land management agencies, while simultaneously adjusting to the economics of beef production and marketing. 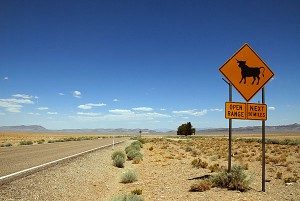 The role of suitcase farmers is being played by certain environmental groups. There is a broad spectrum of environmental advocacy, and some have honorable intentions. However, some generate lots of money from the situation, and they are carpetbaggers.

I don’t mean hundreds of thousands of dollars, I mean a billion dollars a year by recent estimates. There are two major income streams, the taxpayer (through abuse of the Equal Access to Justice Act) and private donations.

In both cases, if there is no controversy, there is no income stream. They advocate the status quo (continued livestock reductions and removal) or flat out contrive controversy because real solutions generate no income.

We now have the imposition of their concept of an agriculture system on an ecosystem for which it is wholly unsuited. The public land issues will eventually mature and produce less income, so their business model calls for moving to private land operations.

Pushed by the environmental lobby, the Department of Agriculture’s Dietary Guidelines Advisory Committee is expected to soon release directives that reduce the amount of meat recommended for consumption because among other reasons, livestock destroy the environment.

That is how they will go after private land livestock producers, this all for the purpose of maintaining an income stream camouflaged by an insincere environmental conservation ethic.

It’s the big guy versus the little guy story retold, and we currently have a general public that is unaware. This must be how Caroline Henderson, author of Letters from the Dust Bowl felt in 1935 as she penned the words, “We farmers here in the United States might as well recognize that we are a minority group, and that the prevailing interest of the nation as a whole is no longer agricultural.”

However, I am an optimist, and there is still time to stop the impending Cinder Bowl. Help must come from the American people. Only they can push back the environmental lobby and allow some common sense and real science to diffuse the problem.

It starts with us. Please tell your neighbors and representatives we have a problem. A happy ending is waiting to be written.

As I see Tom Joad looking at me, I am reminded of Caroline Henderson again. Like her I rephrase a quote from Tennyson’s Ulysses, “It may be that the smoke and dust will choke us down; It may be we shall wake some happy morn and look again on beautiful hills of sagebrush grassland.”

Barry L. Perryman has a Ph.D. in rangeland ecology. He is an educator, researcher, author, speaker and part-time philosopher specializing in natural resource management issues of the western states. He may be contacted at [email protected]

Do think the Great Basin is the in danger? Tell us what you think by commenting below!