The first ever Art of Love Wedding Show was held Saturday at the Nevada Museum of Art.

The event follows a string of recent LGBT events throughout the city — including the rally held outside the Washoe County courthouse, and the CommUNITY Pride Parade. 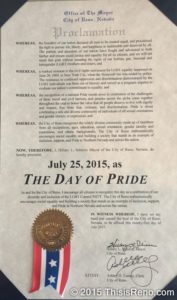 Both events were presided over by our Mayor Hillary Schieve, who announced official proclamations celebrating the days, and the official Day of Pride proclamation from her office was on display at the Art of Love event.

The Art of Love is the latest effort by the community to define Reno as a progressive, forward-facing city. And it’s working.

Amanda Horn, director of communications at the NMA, said, “Today’s goal is to really make inclusion and tolerance be the theme and to celebrate love.”

She went on to say that the attending vendors were all LGBT-supportive businesses, with additional community resource tables providing outreach and information, as well as “a variety of seminars happening today that not only talk about the meaning of marriage but also family and financial planning tips for same-sex couples specifically and also wedding trends for any and all couples.”

Many of the organizers and guest speakers from the aforementioned courthouse rally and pride parade were back again at the Art of Love showing support.

“We had a fantastic rally in regards to the Supreme Court deciding to take up the marriage equality case…and last weekend we got to celebrate Northern Nevada Pride, which is an Artown event and is sponsored by the city of Reno,” said Jeremy Menke, president of Build Our Center and organizer of June’s courthouse rally. “We’re just here to continue to celebrate the LGBT community and happiness and marriage for everybody.” 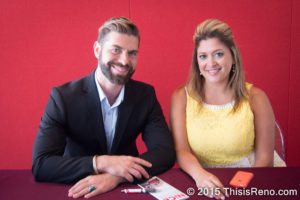 Sean Savoy, founder and director of NiCE, and one of the organizers of pride parade and festival, was at the NMA representing his organization and acting as a moderator for one of the panel discussions.

“NiCE provides resources to the community, spiritual resources,” connecting churches and congregations that support same-sex unions as well as organizations that will perform marriages, he said.

“The Karens” (Karen Vibe and Karen Goody) as they are locally known — a prominent couple that sued to have same-sex marriage legalized in Nevada, and public speakers at June’s courthouse rally — were also guests at the Art of Love, with Karen Vibe attending as a guest panelist at a forum discussion, moderated by Savoy, on wedding and financial planning for same-sex couples.

The Art of Love isn’t just about promoting love, but healthy relationships. As Meredith Tanzer of Build Our Center said: “We believe people should come together in love and learn all about the beautiful ways they can make their commitments stronger and longer lasting.”

And with so many organizations available today to do just that, one would be hard-pressed not to.

Ashly Menke, president of the Reno chapter of PFLAG, and Jeremy Menke’s mother, was also there representing her organization, which offers “support, education, resources for anyone that is an ally or part of the LGBT community.

“We offer so many incredible aspects at our chapter meetings…every third Wednesday we meet over at Northern Nevada HOPES,” she said. “We would love for you to join us if you have any friends or family that are having problems or questions.” 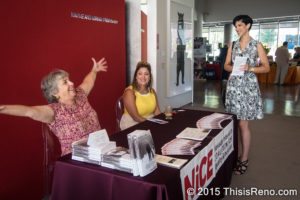 HOPES itself was on hand as well, represented by their administrator and LGBT Community Relations person.

The programming at the Art of Love event wasn’t all serious-minded, though. There were plenty of chocolatiers, bakers, photographers, DJ’s, caterers and venues present to make guests remember that marriage isn’t all work and no play either.

It was a full-on buffet of services for just about everything a couple could need to make their shared life better and an outstanding representation of how far Reno has come. 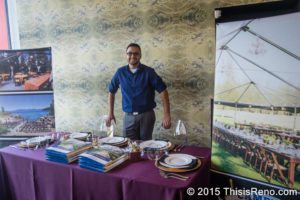