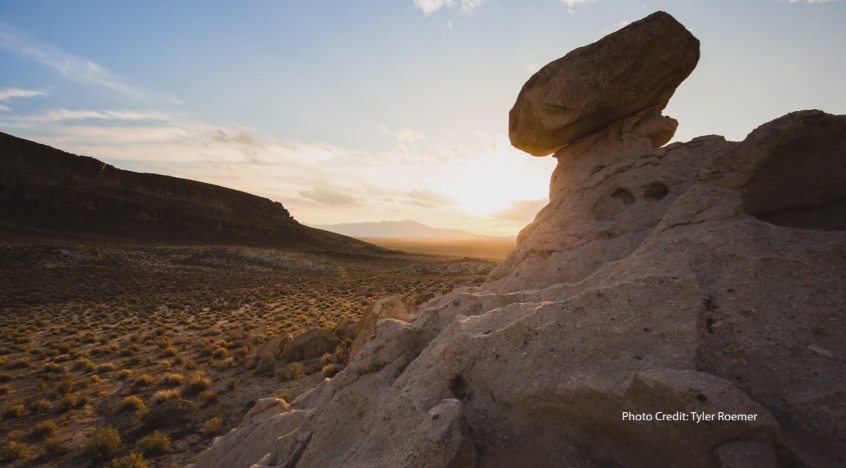 A party-line divide characterizes the response to yesterday’s announcement by the Obama administration that a portion of southern Nevada’s lands have been designated as protected.

“This area is a spectacular expanse of rugged public lands that tell the proud story of the West, from the ancient rock art of our First Americans to the early homesteaders looking for opportunity on the open range,” said U.S. Secretary of the Interior Sally Jewell. “Today’s action builds on local efforts to preserve and protect this special place, while also allowing traditional ranching practices, recreational opportunities, future scientific study and national security exercises. The President’s action ensures that this area will remain a beloved resource for generations to come.”

Artists celebrated the announcement about the monument, which includes artist Michael Heizer’s “City” project, a landscape-level art piece that has been in the works since 1972.

Critics accused the Obama administration of a back-door deal to get the area designated as national monument. Governor Brian Sandoval issued a statement admonishing the administration for not including local stakeholders in the process.

“While we all share a common goal of preserving our lands for the use and enjoyment of generations to come, I would have preferred a more collaborative process when making such an important designation,” he said. “I firmly believe our local ranchers, environmentalists and community stakeholders are the best experts in ensuring Nevada’s lands are preserved, protected and accessible.

“Hairy Berry National Monument unilaterally carved out of #Nevada by two political pals,” he tweeted. “I guess I missed the Nevada delegation meeting to discuss the second largest conservation withdrawal in the history of the state. At least when Senator Bryan was looking for a legacy, they processed it through something resembling regular order.

“Even (administrative) staff was in the dark,” he added later.

The Nevada Farm Bureau issued a statement today denouncing the designation. Farm Bureau President Hank Combs said, “Nevada Farm Bureau is disappointed with the decision of President Obama to designate the 704,000 acre Basin and Range Monument as a national monument. Local government officials and stakeholders have worked persistently to protect and preserve the land and its natural resources in Lincoln and Nye County for generations. This designation will make those preservation efforts more difficult and will negatively affect local ranchers who diligently conserve the land while feeding our growing population.”

There was plenty of praise to go around among the criticism.

“President Obama’s designation of our Basin and Range as a national monument is a victory for conservation and Nevada. With this designation, the Basin’s bighorn sheep, sage-grouse and petroglyphs will be preserved for generations to come. I am deeply disappointed by my opponent Cresent Hardy’s misguided attempts to stop and defund the designation. He clearly takes his cues on how to manage our land from his good friend Cliven Bundy. We deserve leadership in Congress who will fight to protect our natural resources and increase tourism revenue.”

U.S. Sen. Harry Reid (D-Nev.) issued the following statement and video: “President Obama will be remembered for many accomplishments, but I am confident this action today will be a defining legacy for him. I have nothing but admiration for President Obama. I appreciate more than I can put into words what he has done today to preserve the beauty of the Nevada desert for our grandchildren, their grandchildren, and generations to come. He has used his authority under the Antiquities Act to do great things all over the country and he’s not done yet. There are vast landscapes and historic treasures from Idaho to California to Oregon that have languished in Congress. I hope that the President will continue to use his authority under the Antiquities Act to protect these places.”