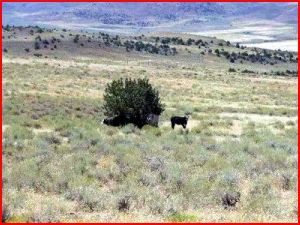 On June 24, 2015 an order dismissing appeals to the Bureau of Land Management’s (BLM) decision in 2014 to close the Argenta grazing allotment near Battle Mountain was approved by Administrative Law Judge James Heffernan.

The order allows for a settled-upon agreement between ranchers and the BLM to take effect.

Cattle will be released back onto the range.

The agreement, which allows grazing on the Argenta allotment with conditions to prevent overgrazing around springs and streams, was a result of discussions among the BLM staff, the National Riparian Services Team, the Argenta grazing permittees and Western Watersheds Project.

“The goal from the beginning was to replace the temporary closure due to drought with a drought management plan that allows grazing while protecting the resources on the range,” said Battle Mountain District Manager Doug Furtado.

“This agreement shows the commitment the BLM has to maintaining our multiple-use mandate while protecting resources to fulfill the sustained yield portion of our mission,” said Acting State Director John Ruhs.

Torell added: “Our hopes are that a commitment by BLM to complete the permit renewal process within three years based on information gained from the adaptive management trial period will occur. Protecting and enhancing our natural resources with sound management without (the) exclusion of grazing is obtainable with collaboration and adaptive management.”