Crash Course For Kids This July: Learn to Speak French Like a Native 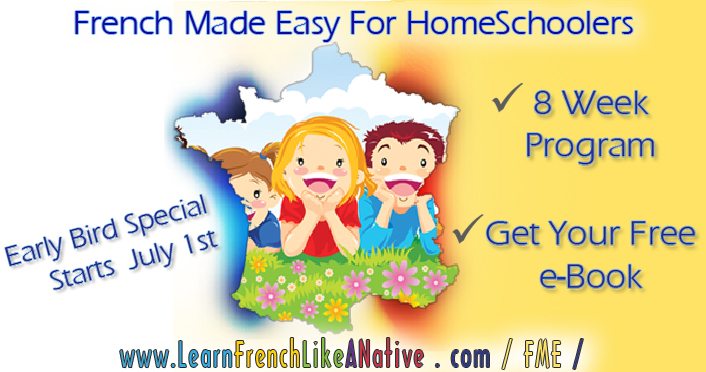 She introduces parents of homeschoolers, to an 8-week program entitled “French Made Easy for Homeschoolers’. Parents get the chance to familiarize themselves with the course and ignite a love of languages to their child before committing to an extensive program.

Marina, who is Francophone (citizen of an ex-French colony) speaks 3 other languages. As a parent herself, she is more than familiar with the challenges of the homeschooling system. Her other credentials include a French college degree in Hotel Management and expertise in culinaria and art. She has worked extensively in restaurants, most notably at these outlets whose details may be obtained online:

She was inspired to create ‘French Made Easy for Homeschoolers’ when she noticed the lack of attention to phonics in the teaching of French as a foreign language. The program is intended to equip children with the skills to pronounce French words properly at this stage rather than later and to learn how to grasp the essentials of a new language with confidence. Further, it hopes to inspire in children the love for language learning in general and therefore significantly enhance their potential to become the global citizens of the future.

Most learners will find the course enjoyable. They’ll not only be learning a new language, they will also have a better understanding of the French people. The French language coach relates the course as much as possible to French culture, food and wine and to its tourist attractions.

When asked about the techniques she uses in ‘French Made Easy for Homeschoolers’, she said she was using techniques that had been developed over generations. “I see the program’s true power each time a French native asks me, ‘Vous êtes Française?’ (Are you a French citizen?),” Marina said.

She expanded on her hopes for the course. “My goal is to meet parents who want to maximize their children’s chances in life by learning to speak French well while improving their grasp of the English language. French is a world language, so proficiency in French will open doors for the child. His or her chances of becoming a global citizen will be increased.”

French is classified as a Romance language and is part of the Indo-European family of languages together with Italian, Portuguese, Spanish, Romanian, and Catalan. French is a descendant of the old Latin language of the Roman Empire and contains influences of the ancient Celtic and Germanic Frankish languages.

The community of French-speaking countries, or la francophonie in French, includes 77 states. It is the first language in France, Haiti, Monaco, parts of Switzerland, Belgium, and Canada, and parts of Louisiana and New England in the U.S.A. It is also widely spoken by other communities in Africa and Asia. French is the fourth most widely spoken European Union language, according to a survey of the European Commission. It also ranks as the third most widely understood EU language.

Parents wishing to learn more about Marina’s French teaching program, may visit the website: http://www.learnfrenchlikeanative.com/ and download a free introductory e-book: ‘3 Simple Ways to Bring French Into Your Child’s Life’.