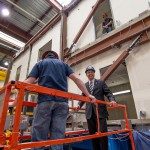 The latest disaster movie, San Andreas, has drawn considerable attention, especially when coupled with the real-life earthquake disaster that struck Nepal April 25 and the magnitude 4.8 gentle-reminder earthquake 100 miles north of Las Vegas that rattled homes and highways throughout the valley on May 22.

“As a couple of our graduate students can attest, after recently riding out the magnitude 7.3 earthquake ‘aftershock’ in Katmandu, even with their poor building standards, destruction in Nepal looked nothing like that seen in San Andreas,” Graham Kent, director of the University of Nevada, Reno’s Nevada Seismological Laboratory, said. “Predictably, for a disaster movie, San Andreas exaggerates for the audience which, as a seismologist, can be a good thing, as it wakes people up to the real-life dangers facing those along fault lines.”

San Andreas doesn’t disappoint. With back-to-back disasters, starting in Nevada, the earthquake works its way from southern Nevada’s Hoover Dam to Los Angeles then on to San Francisco.

Hollywood has decided to go “wall-to-wall” and depict a rupture of the entire San Andreas Fault, which extends from near the Mexican border to almost Oregon. Kent notes that in reality this has not been seen before, and although nothing is ruled impossible, this is a highly unlikely scenario given the past records of both historic and paleo-earthquakes. And, based on this history, the magnitude would be closer to magnitude 8.3, not magnitude 9.6.

“Although criticism of San Andreas from scientific circles is a certainty, as state seismologist for Nevada, with responsibility for monitoring Nevada and parts of Eastern California, I welcome this movie and hope it marks the beginning of a serious conversation regarding the real consequences of a large earthquake in modern America,” Kent, who teaches in the University’s College of Science, said. “Whatever the scientific flaws of San Andreas, and they are plenty, the consequences of a large urban earthquake with up to billions of dollars of damage and thousands of deaths remain unnerving.”

Of course, Hollywood paints a bigger-than-life picture, and plays with the truth in order to entertain.

“Nevertheless, the action scenes kept us riveted, my wife was on the edge of her seat,” Kent said. “It was a great movie.”

Kent has separated fact from fiction by outlining five truths about the depictions in San Andreas:

“As a seismologist and director of the Nevada Seismological Laboratory, and a fan of really good movies, my hope is Dwayne Johnson, the actor known as ‘The Rock’ delivers a good blockbuster hit that does not resemble Hollywood’s 2003 science fiction flop ‘The Core’ in any way, shape or form,” Kent said. “After watching the movie, I’d say it has great potential, but as a seismologist, I try to stay away from most predictions.”

While the movie stretches the truth to nearly the breaking point, it serves a purpose for seismologists wanting to educate the public about the earthquake potential in their communities and how to prepare and respond in an earthquake.

“It was good to see the message of ‘drop, cover and hold-on,’ which we’ve been promoting for several years through the Great Shakeout, presented several times,” Kent said.

The Great ShakeOut is a national public earthquake drill that provides preparedness information and an opportunity to participate in the world’s largest earthquake drill. Kent spearheads the ShakeOut exercise in Nevada through the Great Nevada ShakeOut.

“We make a lot of headway in educating and preparing millions of people with the Great ShakeOut, but a movie like this can really help build awareness to earthquake hazards,” Kent said.

For more information on earthquake research, go to http://www.seismo.unr.edu/ and http://www.unr.edu/cee/earthquake-structural/index.html.