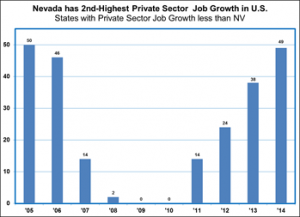 CARSON CITY – This week, Governor Brian Sandoval announced that Nevada now ranks second in the nation for private sector job growth. According to information from the U.S. Bureau of Labor Statistics, Nevada added jobs at a rate of 4 percent in 2014, trailing only North Dakota’s gain of 4.6 percent.

Employment in Nevada totaled 1.06 million jobs in 2014, a 40,700 increase from the previous year. And, the unemployment rate is, today, at 7 percent, about 99,000 unemployed people, which is considerably lower than the 13.7 percent peak at the height of the recession.

“This is extremely positive news for the Silver State,” Sandoval said. “This is more evidence that our economy is becoming stronger and is moving in the right direction. Still, there are too many Nevadans out of work. We will continue our momentum of attracting diverse industries to the state and assisting our current businesses in growing so that all Nevadans will have opportunities to get back to work.”

“This is an especially impressive performance when put it in historical context,” he added.  “Prior to the recession, Nevada was at the top of the job growth rankings.  During the prolonged economic downturn, Nevada’s job losses were the most pronounced in the nation.

“For instance, in 2009 and 2010, job levels fell by 10.1 percent and 2.8 percent, respectively. However, the Silver State began making up for lost ground in 2011, when jobs grew 1.2 percent, the 37th-strongest gain in the nation. Growth has picked up every year since.

“Looking at relative job growth over time offers the best picture of Nevada’s economic performance over the past several years,” Sandoval added. “We have gone from the fastest-growing state in the nation, to the state hit hardest by the recession, to the state that, once again, is near the top of the rankings.”