The Nevada Board of Agriculture met today with members of the public and representatives from the Organic Advisory Council to decide the fate of the Nevada Department of Agriculture’s (NDA) Organic Certification Program. After the opening proceedings the first item on the agenda was ostensibly contentious battle over whether the NDA would end its state-run Organic Certification Program.

“Organic certification is not going away in Nevada,” said NDA Director Jim Barbee. 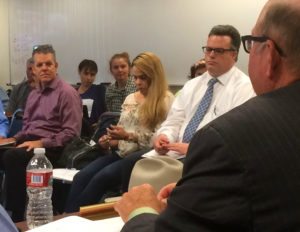 The debate between Barbee’s assessment that the program was no longer fiscally feasible, and a coalition of organic farmers in attendance making the case for its continuance, stretched into the afternoon, with the board vote only taking place after 1 pm.

The Organic Advisory Council and its allies in the boardroom at the NDA building in Sparks spoke at length about what they said was a lack of transparency that had riddled this process. Board Chairman David Stix Jr. and Barbee took the brunt of the frustration and returned it in kind. There seemed to be little love lost on both sides.

Barbee made the case that there was already a network of nine private organic certifiers to provide the same services as the NDA, citing that nearly half of the producers certified in the state do so through these auxiliary certifiers and that California, the country’s largest producer, has no state-run program. 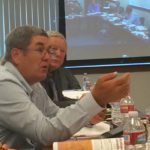 Nicole Sallaberry, Rob Holley, Rick Latin, who are on the state’s Organic Advisory Council, warned the board of the hardship that smaller to mid-range local producers would face paying the much steeper cost for private organic certification. They urged the board to act in solidarity with the organic farmers and support them as they continued to establish their presence in the state.

“I know, having long, long experience with (the) state budgeting process…that $65,000 oversights are just not something that, in my line of work, has ever been acceptable,” Holley said. “We had not been made aware that (the program was in jeopardy).”

Ultimately the organic producers, despite their impassioned pleas for more time, only yielded two Board of Agriculture votes in their favor, a ruling that left some in tears.

Prior to the meeting today, Amber Sallaberry of the Great Basin Food Co-op, said:

“We have been providing information about the Organic Certification Program at the Nevada Dept. of Agriculture (NDA) for the past couple of months.  Unfortunately, we have learned that the organics program is and was already dead.  To make matters worse, a plan has been in place for its demise since last year.”

NDA said it will continue to support the program until June 30, 2016, with promises to help the producers transition to private certifiers.