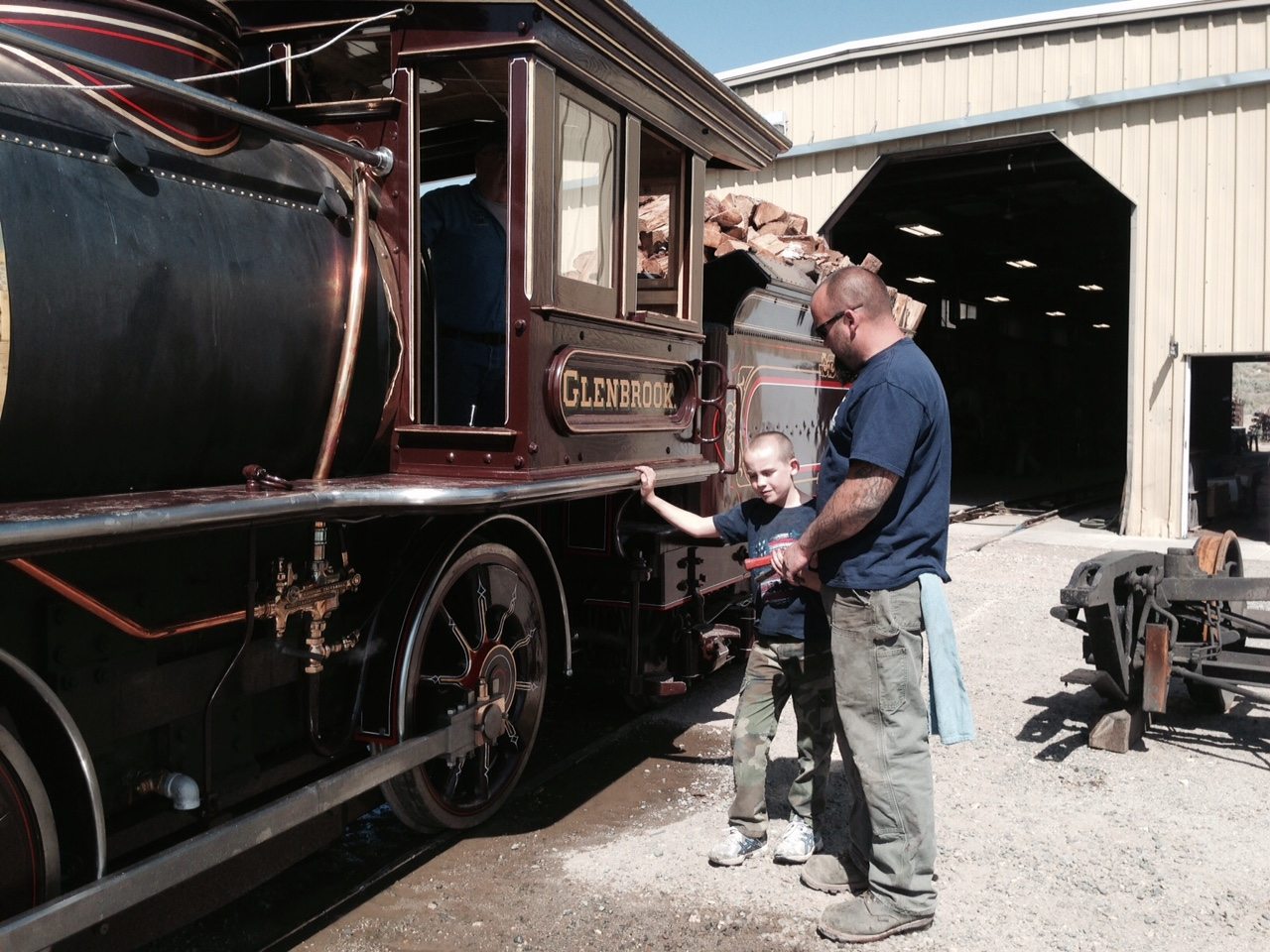 Calvin Dolan watches his dad, Morton Dolan, make last-minute checks on the Glenbrook steam locomotive. The restored Glenbrook will be unveiled May 23 in Carson City.

CARSON CITY, Nev. — It worked Nevada lumber mills in the 1800s, carried tourists to Truckee and Tahoe City in the 1900s and today graces the Nevada State Railroad Museum, Carson City. The Glenbrook, an 1875 narrow-gauge steam locomotive critical to Nevada’s development, will be unveiled May 23, after a 30-year restoration project.

A public dedication ceremony is set for 11 a.m. Both the Glenbrook and its standard-gauge sister locomotive, the Inyo, will be on static display and under steam from 9:30 to 10:30 a.m. for photo opportunities. Another of the museum’s trains, the V&T Locomotive #25, will be used for train rides throughout the holiday weekend.

The Glenbrook first came to Nevada in 1875 and was used by the Carson & Tahoe Flume & Lumber Company to haul lumber from Lake Tahoe sawmills to Spooner Summit. In 1898, it became the power of the Lake Tahoe Railway & Transportation Company, operating on 15 miles of track between Truckee and Tahoe City.

By 1943, it was saved from scrap and donated by the Bliss Family, which had been involved in both ventures, to the Nevada State Museum. After 39 years in the museum’s courtyard, it was sent in 1982 for restoration to what is now the Nevada State Railroad Museum, Carson City. The prized piece was restored with historic accuracy via a grant from the E.L. Wiegand Foundation.

“This restoration has been very close to our hearts at the railroad museum,” Peter Barton, administrator of the Nevada Division of Museums and History, said. “The Glenbrook is such a rare find. Bringing it back to its full glory to tell a tremendous Nevada story has taken our staff nearly a generation. Its restoration will help museums continue to tell the story for many generations to come.”

A genuine memento of the Comstock mines in Virginia City, the locomotive sports its original riveted steam boiler, fired with wood, and its original paint scheme, hand-lettered and striped. For certification, it was tested and steamed in November 2014 for the first time since 1925, just a short distance from where it started.

The Glenbrook’s full history is featured in the May/June issue of Nevada Magazine.  The event is part of the Nevada Division of Tourism’s Discover Your Nevada campaign to promote in-state travel during the spring and summer. The annual Discover Your Nevada campaign is designed to show Nevadans the variety of adventures available through the state and ultimately to encourage travel within it.