Do You Have What It Takes To Be a Cop? ThisisReno Takes the Test 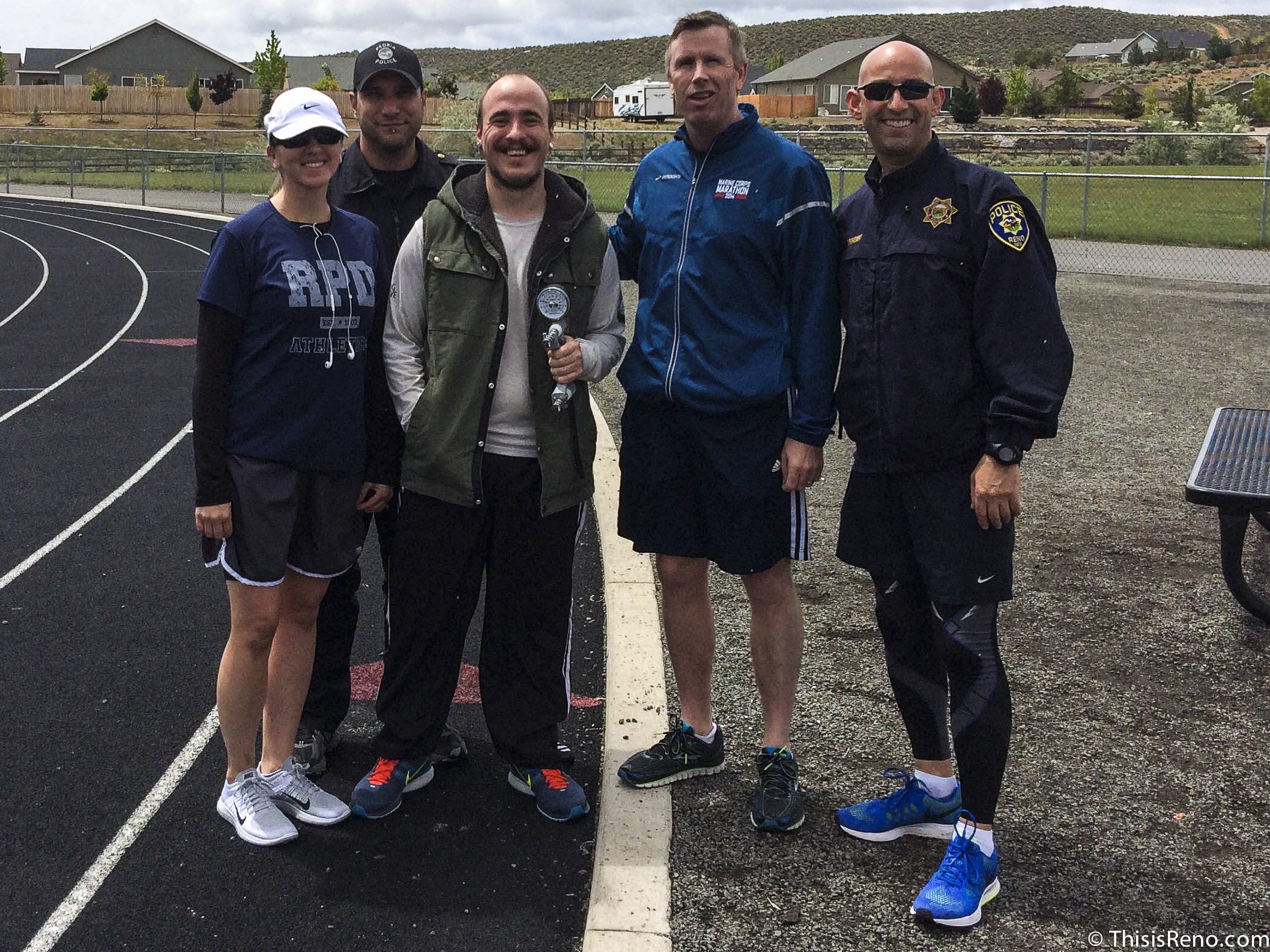 The track field at North Valleys High School yesterday is cloudy with fits of rain, but you wouldn’t know it from the animated crowd gathering a few minutes before 10 am.

These are prospective police officers doing a mock fitness test with the Reno Police Department (RPD) — joined by the peppy news crews from Channels 2 and 4, and of course, this intrepid reporter.

Could we pass the batter of physical trials that police recruits have to pass?

“The Run with a Reno PD Recruiter program,” said RPD’s Tim Broadway, “is an opportunity to workout alongside a Reno Police Officer, ask questions and meet other people who are interested in a career in law enforcement.

“It also gives applicants and community members a chance to gauge their physical fitness readiness. ”

The officers administering the test arrive and we form up in a semi circle by the wall for our first battery of tests. First will be the Jamar grip test, a simple gripping machine with a meter for poundage pressure. The machine goes around the circle, and to pass we need to have a grip strength of at least 80 lbs. Almost everyone breezes through this.

Next up groups of eight form up on the wall behind marked X’s. We are to perform a simple maneuver, bend – twist – touch. Hands locked, we squat down, touch the ground, rise up and touch either side of the wall behind us — keeping our hands together. We have to do this 15 times in 30 seconds.

Once we’ve all proven our spines are bendy enough, we head to the track proper for sit-ups. The officers inform us that women almost universally do better at this than men but not to worry because pushups are next. We will take the lead there.

They aren’t wrong. We form up in groups of eight again with a sporting partner to hold our feet. My partner is a slender young woman from one of the news crews. We have to complete 32 sit-ups in one minute. I went first and found myself lacking. I managed 30 on the nose. My partner traded places with me and made it look easy.

Onto the push-ups — 24 to be exact and no time limit. I thankfully managed to do these without much effort and joined the early finishers off to the side as everyone trickled in, those having trouble getting hands-on instruction from the attending officers.

The 100-meter dash: 20 seconds to get from A to B. We formed up in lines and shot off on the signal from our chaperones. A little breathy but okay. Mission accomplished.

Finally, the 1.5 mile run around the track. I freely admit I was huffing and puffing and fighting cramps after my third lap.

But I finished. And so did everyone else. Everyone had something to prove to themselves.

For the recruits it was to be good enough to wear the badge. For the rest of us I think it was the reality of training with these inspiring individuals and the gravity of the job they aspired to.

No one wanted to be left behind, and with the encouragement of our officers, no one was. They were available to answer questions, offer guidance and even schedule joint runs for those who struggled through the run.

Some police departments are all about culling the herd, the few and the proud and all that.

What stands out about RPD is they don’t want to thin us out — they want as many of us as they can get, from as many backgrounds as they can pool from.

I spoke at length with Lt. Tim Donohoe, and the one thing he made clear to me was that policing Reno was an act of citizenship, stewarding the place you called home.

It’s a far different ethos than you’ll see in many other places but it seems to be an effective one.

Reno’s police officers, including some present at our mock physical trial, train police departments all over the world, with a number of departments coming from the Eastern Bloc.

With a strong emphasis on community outreach like the event, I was lucky enough to participate in, and the philosophy that they don’t find the best, they create the best; they are a progressive department that eschews paramilitarization in favor of something uniquely and completely their own.

After the laps I complained that I was a smoker, reassuring my overseers I would have passed if I hadn’t gone back to my bad habit.

It was an odd moment for an epiphany but it struck me how forward-thinking these men and women are. For them there is no thought for what has come before; instead, they are looking ahead to a better future.

Policing here in Reno isn’t just protecting lives, but the idea of a better brighter tomorrow. Not bad for a rainy day.

Emmett Esnard
When Emmett isn't interviewing people in his too-loud, New Yorker style of brain-picking, he is pushing veggies on addictive personalities at a farmer's market, doing odd forms of calisthenics, researching how to live to be 300, or chipping away glacially at his first novel. He also enjoys hot sauce, comic books, and living outside the box as a militantly liberal social progressive (insert other synonym here) that still thinks guns are cool and plans lackadaisically for the apocalypse by learning survival skills (read: home economics). He also dabbles in martial arts and nude portrait drawing. Volunteer models are welcome. He thinks third person mini bios are fun. He wrote this.