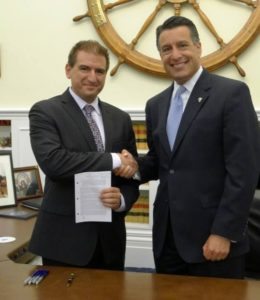 It’s received little media attention in the Silver State, but PopeHat’s write-up about a bill moving through the Nevada legislature would spell disaster for free-speech in Nevada, say critics of the law.

Nevada’s Anti-SLAPP law passed in 2013 was considered among the most stringent in the nation. SLAPP, or Strategic Lawsuit Against Public Participation, is a crucial free-speech legal concept affecting potential defendants against claims of defamation. According to PopeHat’s Ken White:

In 2013 Nevada passed the strongest anti-SLAPP statutes in the United States. This statute was muscular. Not only did it cover a wide array of speech, and require substantial proof of the potential validity of a claim, it had frills like a potential $10,000 penalty on top of attorney fees for SLAPPers and a private cause of action so targets of SLAPP suits could sue their tormentors. My friend and colleague Marc Randazza, First Amendment badass, helped frame it, which is why it was so strong. It’s already proven effective in Nevada’s courts. It’s an excellent tool to protect free speech from meritless lawsuits.

The legislation is in the process of being watered down during the current session of the legislature, and out-of-state commentators are asking why.

“S.B. 444, which was introduced at the behest of Wynn Resorts on March 23 and unanimously approved by the Nevada Senate on April 15, is scheduled to be considered by the Assembly Judiciary Committee on Friday. At an April 6 hearing of the Senate Judiciary Committee, Wynn Resorts lobbyist Todd Mason said “our intent today is to improve the existing law, not to roll back the SLAPP statute.” Mason said the revised law would “continue to protect the critical right for core First Amendment speech as well as protecting the right to petition.” But Randazza, who helped enact Nevada’s anti-SLAPP law, and Popehat’s Ken White highlight several changes that would make it easier for thin-skinned rich guys to punish their critics with litigation….”

TechDirt went further, (as did the Las Vegas Review-Journal‘s John Smith) citing a defamation case, in which Wynn lost, as a possible motivator for the legislation:

“In the comments to our post, someone noted that casino billionaire Sheldon Adelson recently lost a defamation case thanks to Nevada’s anti-SLAPP law and was told to pay up the legal fees of the guy he sued. Adelson is also pretty well-known for well-financed efforts for political causes he believes in. So that makes him a rather obvious choice. But over on his blog, Marc Randazza points the finger at a different Las Vegas casino-owning billionaire: Steve Wynn, arguing that Wynn also just lost a defamation lawsuit, thanks to California’s anti-SLAPP law. Randazza points to some evidence tying a top Wynn lawyer/lobbyist, to the new effort.

“And all I can think is, what is it about Las Vegas billionaire casino developer/owners that makes them so thin-skinned as to sue critics to try to silence their free speech?”

Asked what this new legislation, SB444, would do to the current law, signed by Governor Sandoval in 2013 (see image above), PopeHat’s White, a First Amendment litigator and commentator, said:

“Nevada had the best anti-SLAPP statute in the country. This bill drastically reduces the penalties for filing a SLAPP suit, reducing the statute’s deterrent value.  It also makes it significantly more dangerous for a defendant to file an anti-SLAPP motion, making it a poor tool.  Finally it changes the applicable deadlines and standards so that filing an anti-SLAPP statute is impractical and uncertain.  If you care about free speech, and favor strong anti-SLAPP statutes, it’s a terrible bill.  Nevada citizens should ask who pushed it through and why, and why their senators agreed to it.”

The bill still has to pass the Assembly and then be signed into law by Sandoval. A request for comment by Sandoval has been submitted to the Governor’s Office.