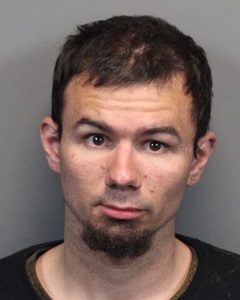 Just before 9 am today, March 9, 2015, Reno Police received a call of a possible robbery and carjacking in the 2800 block of Northtowne Lane.

When police arrived, they found a 79-year-old male victim of a battery. REMSA and Reno Fire medics treated the victim, who had received a non-life threatening injury.

As officers investigated the incident, it was determined that a male and female had recently met the elderly male and befriended him. The group went to the Northtowne Lane address where the male suspect battered the elderly victim and the unknown white female drove off in the victim’s vehicle.

The vehicle is described as a white, late-90’s Kia Sportage with possible California plates. It was being driven by a white female in her late 20s or 30s with unknown color dyed hair

The male suspect was located and arrested. Arrested for battery with elderly enhancement was 25-year-old California resident Jeremiah Smith.