By ThisIsReno February 24, 2015
Image via The Western Mysteries 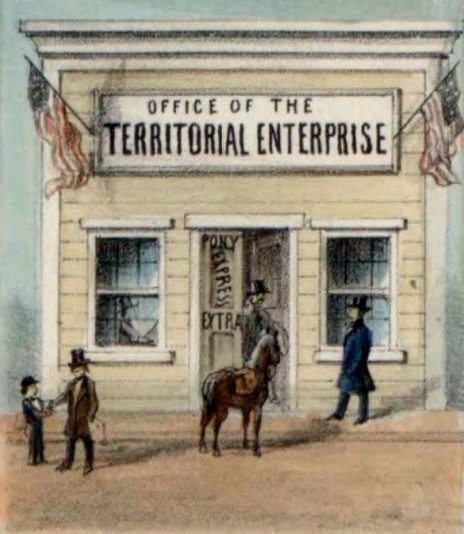 Image via The Western Mysteries

Even though newspapers tend to fall by the wayside these days, Scott Faughn, publisher of The Missouri Times, and Elizabeth Thompson, politics and policy reporter, are resurrecting the Territorial Enterprise, Nevada’s first newspaper.

First written in Genoa, beginning in 1858, the paper soon moved to Virginia City and helped a number of writers get their start in the newspaper business, including Samuel Clemens, who wrote about the Territorial Assembly under the pen name of Mark Twain. Twain spent a lot of time in the Sierras, particularly in Lake Tahoe, writing about the area and following the political change happening in the state at that time.

According to Faughn, the paper will primarily cover politics, policy, business, and culture throughout the state, much as the paper did during its first incarnation. “[We have a passion for sharing political information with Nevadans so] expanding our company in the form of resurrecting the Territorial Enterprise in Nevada is a great next step toward our company’s goal of connecting people with more information about their government,” Faughn said.

Everyone is pretty enthusiastic about the revival of the paper, especially John Schafer, who owns the Mark Twain Saloon in Virginia City and was asked to be a consultant on the project. “It is with great excitement that I look forward to watching the revitalization of one of the most magical names in western journalism,” said Schafer.

2015 is not the first time the paper has been revived, though. According to its history, the paper was out of publication for a time, revived in 1946, and then later purchased and re-revived by author, journalist, and railroad historian Lucius Beebe and his long-time companion and co-author Charles Clegg in 1952. Clegg and Beebe sold TE in 1961. The publication languished, and the new owners printed the last issue in 1969. In the 1980s, John Schafer’s family revived the paper, which they later sold to owners who planned to turn it into a humorous magazine of national stature. The plan never came to fruition; TE has been dormant since.

The new Territorial Enterprise website will launch March 12. The first print issue, a monthly glossy magazine, will also be released then. Visit the paper on Twitter @TerritorialEnt.

Court awards attorney fees to This Is Reno in public...

TWAIN: Adventure and photography in the Sierra

University of Nevada, Reno presents rare performance of play too...