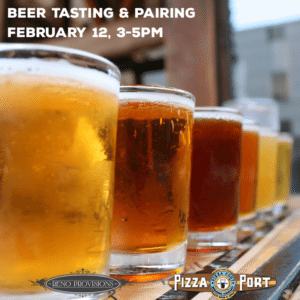 EDIT: This event has been canceled, as noted in the Reno Foodies group on Facebook. Thanks, Reno Foodies!

Reno Provisions is a sustainable food venue that acts as a cafeteria, market, demonstration kitchen, butcher shop and event space. Opening in December, the site is already a popular destination for locals and tourists alike due to diverse offerings and its celebrated chef-owner, Mark Estee.

The venue has teamed up with Pizza Port, a California brewery that specializes in “flavor-driven principles,” for a Beer Tasting & Pairing luncheon featuring six different draft selections of beer and complementary small bites. The price is $30 in advance and $35 at the door.

Port’s most popular pour is the Chronic Ale, a mellow amber ale with 4.9% alcohol content originally brewed over a decade ago. The beer is light-bodied with a slightly caramel malt character and will be served as one of six selections at the luncheon. The other five beers include:

EDIT: This event has been canceled.

The verdict is in: Reno is big enough for two...

Wolf Pack Athletics to auction off skyboxes catered by local...