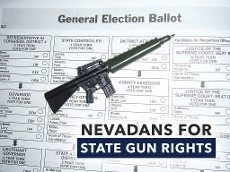 Nevadans for State Gun Rights sent a letter to Secretary of State Miller last week, urging him to invalidate the initiative petition to mandate background checks on all firearms sales in Nevada.

“Per Nevada law, there is a very strict procedure for submitting ballot initiative signatures, and the records show that the proponents of the initiative petition did not follow the requirements of the law,” said Don Turner, President of Nevadans for State Gun Rights.

“Signatures were submitted for verification to at least one county after the deadline,” stated Turner.

Each county in Nevada is required to sample and validate the signatures that were collected in their county. The deadline to submit signatures is the 2nd Tuesday in November, which due to Veteran’s Day, was extended to November 12.

Nevadans for State Gun Rights stated that, according to the Storey County Clerk, signatures were not delivered to their office until November 13.

Nevadans for State Gun Rights are reviewing the submissions to the other counties as well, and will prepare additional letters to Secretary of State Miller.

New cybersecurity company to hire up to 150 technology jobs