High Sierra Brewing Co. will open in Sparks on Dec. 20

By ThisIsReno Published: December 2, 2014Last Updated on May 22, 2017
From left, High Sierra Brewing Co. owner Jim Phalan, assistant brewer Tanner McKinlay (white shirt) and brewmaster Tim Mason prepare to mash in for the first beer made at the new location in Baldini's Casino. They made OMG IPA 2.0 Oct. 25. Photo by Mike Higdon 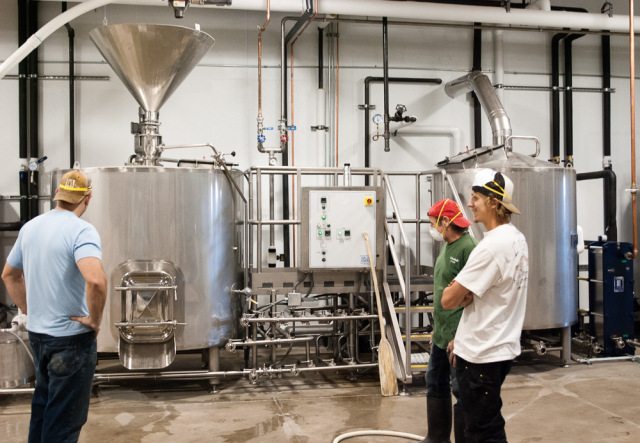 Like a phoenix, High Sierra Brewing Co. goes through a complete rebirth in less than a year

In nine months, High Sierra Brewing Co. closed its doors in Carson City, then formed a new partnership with Baldini’s Casino in Sparks, purchased and installed all-new brewing equipment, hired a new brewmaster from the U.S. Virgin Islands and will reopen in time for its fourth anniversary and owner Jim Phalan’s birthday.

The new chapter of High Sierra Brewing Co. will open late November with a grand opening Dec. 20. On Oct. 25, owner Jim Phalan, brewmaster Tim Mason and assistant brewer Tanner McKinlay started the first batch of OMG IPA 2.0 on their brand new brew system. They will need to brew non-stop for three weeks to meet the demand of their distribution contracts and prepare enough beer for the soft opening next month.

High Sierra rebuilt itself from the ashes at an unheard of speed. Most brewery builds take at least a year to source equipment, find a location, build out and open. Jim, instead, formed a 50-50 partnership with Baldini’s, who wanted to bring more life to Sparks with a brewpub. After forming the partnership in March 2014, Jim immediately found new brewing equipment and started the process of rebuilding the High Sierra brand. In the meantime, Great Basin Brewing Co. contract brewed for the High Sierra Tap House in Carson City behind Firkin and Fox. The High Sierra Tap House will continue to exist as a satellite location after the new brewpub opens.

In the summer, brewmaster Tim Mason and assistant brewer Tanner McKinlay started work on recipes and preparation for the new brewhouse. Tanner said he applied for the job at the perfect time in June after talking to a lot of other breweries in the area. Saturday was his first professional brew day. Tim worked as a brewer in the Caribbean for the last 18 years and wanted to come back into the states to make visiting his mother and mother in-law easier.

Before moving to St. Croix, Virgin Islands, Tim brewed at Oasis Brewery in Boulder, Colorado. Other than passing through the Lake Tahoe area, this year marked his first time in Reno. He took the job at High Sierra with great excitement but also experienced sudden fear when he realized how little he knows about the area.

Tim said he looks forward to skiing again. And voting. And health insurance. And brewing lagers. His last job at Rock Bottom Brewery didn’t have enough tank space for extra seasonal beers, such as a pilsner, a grolsch, an Oktoberfest or a double bock, which he plans to make at High Sierra. The new High Sierra brewery space allows for expansions to increase volume and number of beers over time. Jim and Tim said they may also consider bottling and a small still in the future.

Compared to the near-finished brewery, the restaurant lays in shambles at the moment. But in a few weeks, a new bar and all new decor and furniture will turn the space into a complete brewpub. High Sierra’s original beers will still exist but with Tim’s personal signature and tweaks. The award-winning Buzzed Bee Honey Ale will stay closer to the original recipe. Tim wants to add a brown ale and an American pale ale in addition to the lagers above. In total, Jim wants the bar to hold 14 drafts.

By Dec. 20, High Sierra will be the eleventh brewery in Reno-Sparks area and the second brewpub in Sparks, Nevada in 21 years since the first, Great Basin Brewing Company, opened in 1993. The location formerly known as High Sierra Brewing Co. is being renovated for the new Lake Tahoe Brewing Co. Read our previous coverage of High Sierra’s rebirth this year.

The original story published on DrinkableReno.com.

Visit them on Facebook for constant updates of the rebirth