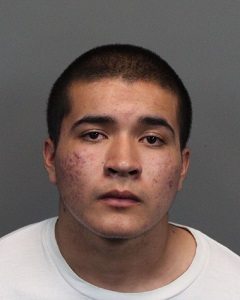 Shortly after 6:30 pm on July 20, 2014, officers from the Reno Police Department responded to the 900 block of Nutmeg Place in South Reno on the report of a subject who had been shot. Officers located a 16-year-old male who had suffered a gunshot wound and was transported to a local hospital where he succumbed to his injuries.

The Regional Gang Unit (RGU) and Reno Police Department homicide detectives responded and began their investigation. Through numerous interviews and leads, they were able to identify a suspect in the murder who had fled Reno and was suspected to be in San Jose, California.

In August, 2014 detectives contacted the San Jose office of the U.S. Marshals, and through a joint effort with the marshals, the suspect was located and arrested. Due to the defendant in this case not being adjudicated as an adult at the time of his arrest, his name was not released.

The suspect who was arrested for one count of first degree murder has since been adjudicated and has been identified as 18-year-old Cristian Guerrero-Mena.