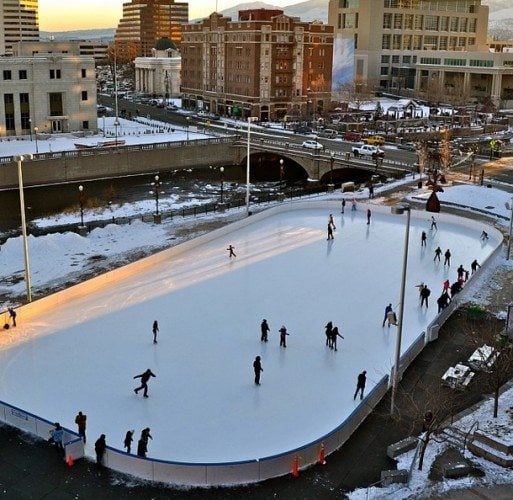 The City of Reno’s annual tree lighting event will take place on Tuesday, November 25, 2014 at City Plaza. The City invites everyone to attend this celebration as a kick-off event to the holiday season.

The evening will include the Billinghurst Choir singing Christmas carols, mascots Wolfie and Alphie and cheerleaders from the University of Nevada, and Reno Aces mascot Archie. The Salvation Army will be providing free coffee and hot chocolate.

The event schedule is as follows:
4:45 p.m. – Billinghurst Choir begins singing Christmas carols
5:12 p.m. – Mayor Schieve and Council Members welcome the crowd
5:15 p.m. – City officials flip the switch to light the tree; followed by a procession to Reno Aces Complex led by Reno Police Department motorcycle officers and the Reno Fire Department antique fire truck.
6-10 p.m. – Ice rink opening for the 2014-2015 season at Aces Ballpark
Also, as a part of the City’s senior giving donation drive, an RTC electric bus will be parked in front of Aces Stadium from noon to 8 p.m. Anyone who donates to the Stuff-A-Bus program will receive one free ice skate rental for that evening. For more information, visit Reno.gov/SeniorGiving.