By ThisIsReno November 5, 2014
Scott Tyler, right, unspools fiber optic cable in preparation for lowering it down a bore hole that goes 200 meters through the Antarctic’s Ross Ice Shelf and 600 meters into the ocean. 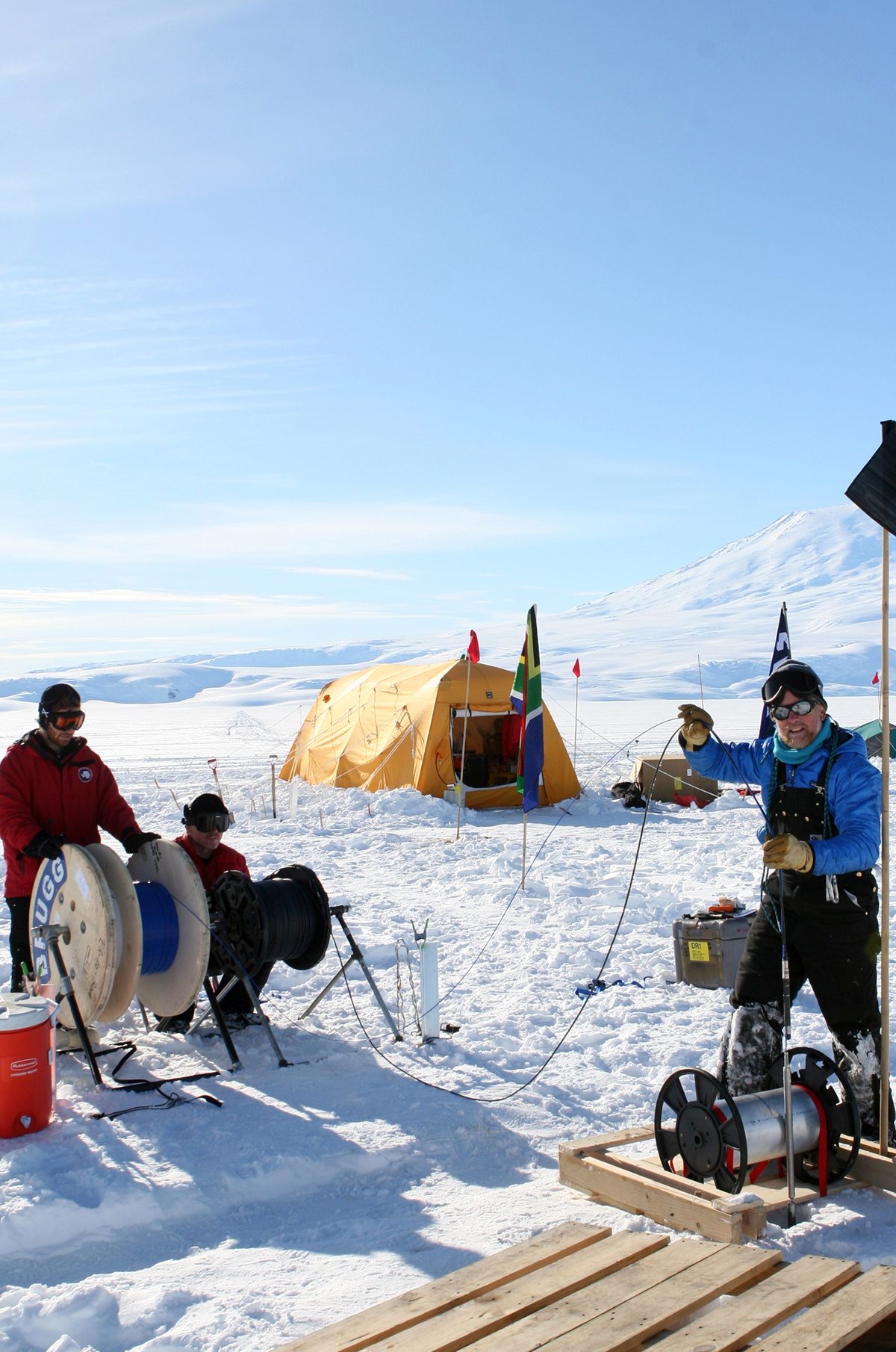 Scott Tyler, right, unspools fiber optic cable in preparation for lowering it down a bore hole that goes 200 meters through the Antarctic’s Ross Ice Shelf and 600 meters into the ocean.

For the first time ever, scientists have recorded temperatures continuously at the bottom of an Antarctic ice shelf where warmer sea water threatens to erode the ice which, if it collapses and glacial melting occurs, could cause a three-meter rise in ocean levels around the world.

“This is the first time we can see the changes in the melting of these enormous ice shelves daily and at millimeter accuracy,” said Scott Tyler, professor of geosciences at the University of Nevada, Reno. “This is critical for detecting the changes that may be occurring due to climate change.”

Tyler and his research team dropped a 3/4-mile-long fiber optic cable through the Ross Ice Shelf and into the frigid sea waters. The cable, when combined with a laser, acts as a thermometer. It recorded temperatures along its length every two to four hours, for 14 months. The change in temperature at the sea/ice interface indicates the thickness of the icepack as warm wind-driven waters eat away at the bottom of the ice shelf.

“The ice shelves serve as the ‘corks‘ holding the large glaciers of west Antarctica from sliding into the ocean and raising the sea level,” he said. The Ross Ice shelf is the world’s largest body of floating ice, the size of France, on the Pacific Ocean side of the continent.

After nearly three years of preparation, implementation and data gathering, Tyler said he is pleased with the data gathered from the fiber optic cable hanging 600 meters to the bottom of the ocean at McMurdo Bay on the McMurdo Ice Shelf, a subsidiary of the Ross Ice Shelf.

“We were getting data downloads here at home eight times a day and the system recorded and sent temperatures and pressures perfectly,” Tyler said. “Our goals are to show that we can install these monitoring systems quickly and inexpensively, and then provide continuous data via satellite links throughout the long Antarctic winter.

The site on the McMurdo Ice Shelf was chosen to provide realistic ice sheet thickness, sufficient ocean depth and ease of logistics to adequately test power supply viability and data communications. Tyler worked with a team of researchers at the spot about 25 kilometers from the McMurdo Station research outpost. Members of the team were David Holland, an oceanographer at New York University, Victor Zagorodnov, a glaciologist at The Ohio State University and Alon Stern, a graduate student at New York University.

The Antarctic study, based at the University of Nevada, Reno, is funded by the National Science Foundation’s Office of Polar Programs and other NSF grants.