By ThisIsReno Published: October 10, 2014Last Updated on May 22, 2017
This panel controls the two stills at Verdi Local Distillery. The panel stands next to a small desk in the center of the room. Photo by Mike Higdon. 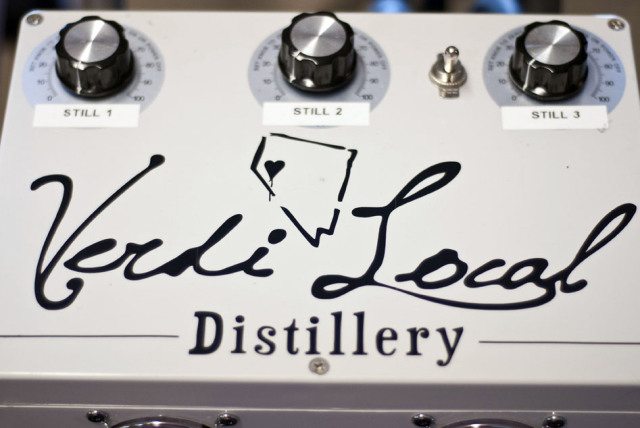 This panel controls the two stills at Verdi Local Distillery. The panel stands next to a small desk in the center of the room. Photo by Mike Higdon.

On Old Highway 40 off I-80, one mile from the California border, an unassuming little house sits between a saloon and coffee shop. Until this week, the building with the cowboy silhouette painted on the front held little significance for anyone driving through Verdi. But after a renovation transformed it into Nevada’s newest craft distillery, people won’t want to pass it by.

Inside the renovated home, an eclectic mix of cozy decor greets distillery visitors. On the left, historical images pasted to the wall tell the story of prohibition, Verdi and the new distillery. In the middle, a bar made of reclaimed wood beams from a burned down house waits for patrons to sit and drink. And on the right, two tiny 26-gallon stills stand on a pedestal in front of the window while two 80-gallon fermenters bubble away on the other side of the room. Small details add character to the distillery, such as the banjo on the wall and the chandelier gifted by friends. If you ask nicely, owners Jeremy and Katey Baumann may even show you their original painting by John Williams (you’ll know it when you see it).

Their Apple Cinnamon Whiskey starts out as 180-proof white whiskey that reduces to 66-proof flavored whiskey after adding pure apple juice, cinnamon sticks and wood. The combination results in a pleasant flavored liquor reminiscent of grandma’s spiked winter cider. Some locals like their apple whiskey hot with tea for a cider toddy while others prefer it chilled. But no matter how it’s served, most folks call it “BOJ” or Black Out Juice because it’s so easy to drink. Though the whiskey is made from a sugar mash with cornmeal added, instead of a corn or grain mash common with bourbon whiskey, it’s not as sweet as other cloying, flavored drinks.

In the future, Verdi Distillery will release a lemonade whiskey and a berry whiskey for next spring and summer. For now, Jeremy and Katey want to focus on building their business so they don’t need to buy ingredients from the grocery store. Katey also wants to replace the couch in the front with pub tables. She originally thought they would need a place to sleep since distilling takes about 12 hours but luckily she hasn’t had to stay over night yet.

For more about this story, check out Drinkable Reno.com.

First batch stats: Each batch only produces 120 bottles. Batch one comes with a Nevada-shaped leather charm with “Batch One” engrave on it and costs $40. Future batches are $20 a bottle. As with all Nevada distilleries, customers can only buy two bottles per person, per month.