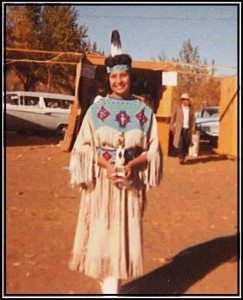 Fifty years ago, Aloha Callac-Jones was one of 22 women from throughout the state to compete in a traditional Indian princess pageant to celebrate Nevada’s 100th birthday. She won the crown in 1964 and when the state celebrates its 150th birthday, Callac-Jones will be here.

She will travel from her home in Florida to join in the birthday celebration and the 2014 Sesquicentennial Honoring Reception for the 1964 Centennial Indian Princesses, co-hosted by the Nevada Indian Commission and the Reception Planning Committee.

“I am honored and excited to be a part of the 150th celebration. And, excited to see the girls that I ran against, to know how their lives turned out and what they have been doing in the last 50 years,” said Callac-Jones.

“We are honored to be able to welcome these 22 women back to Carson City after 50 years, to join in the state’s birthday celebration. Some of these women are making the journey home from as far away as New York and Alaska,” said Sherry Rupert, executive director of the commission. A reception in their honor is planned from 5:30 to 8:30 p.m. Thursday, Oct. 30 at the Gold Dust West Hotel Casino, 2171 East William St., Carson City.

All who were contestants of the Centennial Indian Princess Pageant in 1964 are invited to attend the event at no charge and guests of the committee. Supporters can purchase individual reception tickets at $35 each or $300 for a table of eight. Reception tickets are limited and available through Wednesday, Oct. 22. The Nevada 150 Commission has proclaimed the observance a signature event of the state’s anniversary celebration, Rupert said.

Princesses are also invited to participate on a float entry for this year’s Nevada Day Parade, along with Stewart Indian School alumni and are encouraged to wear their shawls or shawls provided to them by the commission. The weekend also includes the 33rd Annual La Ka Lel Be Powwow at the Carson Colony Gym, 2900 South Curry St. Friday, Oct. 31, at 7 p.m. for the grand entry, then on Saturday at 2 p.m. and 7 p.m. and Sunday at noon.

“We are preparing a program for sale at the event that will include photos from the princesses and brief statements of what each has been doing since the 1964 celebration,” Rupert said. For more information, contact the commission at (775) 687-8333 or [email protected]