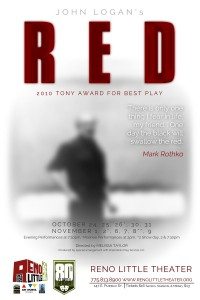 Reno Little Theater (RLT) is committed to making live theater accessible to everyone in Northern Nevada. The theater is proud to once again offer American Sign Language interpreted performances for the deaf community at RLT.

The first ASL-interpreted performance will be for John Logan’s Red on Friday, November 7 at 7:30 p.m. There will be a pre-show reception with wine and cheese in the upper lobby at 6:30 p.m.

The second ASL-interpreted performance, for Vanya and Sonia and Masha and Spike by Christopher Durang, will be on December 5 at 7:30 p.m.

To reserve seats in the ASL section for either night, send an email with the number of seats and name of patron that will pick-up the tickets to McKenzi Swinehart, Director of Programs & Development, at [email protected] or call our main ticketing line at 775-813-8900. Seating is limited, reserve early.

The Tony Award Winner for Best Play in 2010, Red is an intense 2 character bio-drama that follows expressionist painter Mark Rothko and the dynamic relationship between the artist and his work. When Rothko is commissioned to create a painting for the Four Seasons restaurant, he works through his internal challenges about “selling out” with his young and talented assistant.

Cohabitating middle-aged siblings, Vanya & Sonia, have their lives turned upside down when their movie star sister, Masha, returns to the family home with her much younger lover, Spike, to announce she’s selling the family home where the pair resides. This uproarious comedy takes Chekhov’s characters and plots and transports them to a dysfunctional modern-day family. Tony Award Winner for Best Play in 2013.

Five events: Axes, drag and Kenny Wayne Shepherd (but not...

Sierra School of Performing Arts presents Into the Woods in...