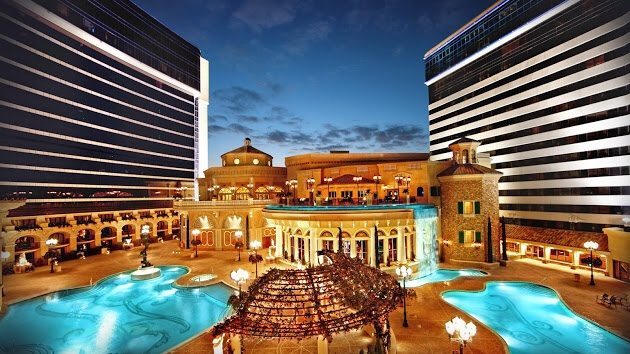 The Peppermill Resort Spa Casino received the 2014 Sustainability Award at the Stars of the Industry Hospitality Awards Gala held in early October at the New Tropicana Havana Room.

All Nevada properties including Las Vegas were considered for the award chosen by the Nevada Hotel and Lodging Association.

Peppermill Reno has received numerous awards for its ever-evolving sustainability efforts. Notably, the two-million-square-foot property is the only U.S. hotel to be heated completely by an on-site geothermal well. This accomplishment cost the resort $9.7 million and involved 4,400 feet of drilling. The resort has consequently reduced its CO2 emissions by 12,000 metric tons per year.

While the state-of-the-art geothermal system headlines the Peppermill’s green initiatives, the resort has invested in making every facet of its operation more energy efficient and environmentally friendly. This combination of green initiatives makes Peppermill Resort Spa Casino a leading example of environmental stewardship in the nation.

The Peppermill’s green initiatives include:

Installation of two Tesla Connector Charging Stations. These high-powered connectors run off of a 240-volt circuit that supplies power at 20KW – adding up to 58 miles of range.

Comprehensive water conservation programs, including 40,000-square-feet of artificial grass turf, save the Peppermill approximately 5.2 million gallons of water per season and reduce the hotel’s use of chemicals and pesticides.

LED parking lot lights and interior LED and fluorescent retrofit lighting recently installed throughout the resort saves approximately $130,000 a year in electrical energy cost, resulting in an average of $ 98,000 in rebates from NV Energy each year.

Reusable utensils, napkins and tablecloths in all restaurants

Comprehensive recycling of laundry water saves millions of gallons of water per year. The Aqua Recycling system captures, filters and reuses enough water to save the resort hotel approximately $246,000 per year.

Shredding and recycling of all on-site paper receptacles.