By ThisIsReno Published: October 8, 2014Last Updated on May 22, 2017
Lance Jergensen looks out through his hops. Lance is now the head brewer at Tonopah Brewing Company and Pigeon Head Brewery in Reno. Photo provided by Tonopah Brewing Co. 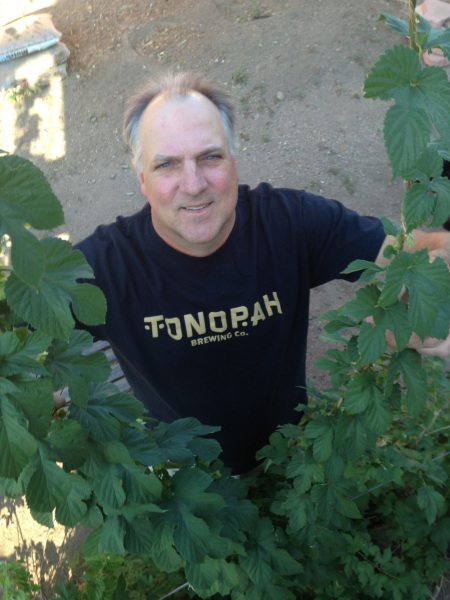 Take a quick weekend trip to Tonopah Brewing Co. for a strong collection of historically inspired beers and BBQ

Lance Jergensen loves making beer. That love took him to the newest beer oasis in the middle of Nevada. The head brewer of Pigeon Head Brewery and owner of Rebel Malting took a third job as head brewer at the new Tonopah Brewing Company in Tonopah making beers that represent Nevada’s early immigrant cultures.

The opposite of Pigeon Head Brewery, Ukrainian and Irish workers inspired an Irish ale, a Baltic porter and a Ukrainian type lager with heavier body. Lance also made an Irish stout and a hefeweizen on tap now. And unlike most folks, he prefers a traditional English IPA, not an aggressive American west coast IPA.

Lance said he probably has the greatest brewery in the state because of the technology and equipment and was glad Fred and Nancy Cline asked him to help them build Tonopah Brewing. The brewhouse is a custom-made system from Bavaria, Germany that allows decoction and step infusion used in traditional German brewing. The kettles resemble large copper pots instead of more modern cylinders.

Before the brewery, the Clines purchased the Mizpah Hotel, built in 1907, and restored it to its original grandeur. Tonopah is very close to their hearts and Nancy’s relatives founded the town. The Clines wanted to take Tonopah back to its original boomtown status and the Mizpah was the first step in that direction. They also own two wineries in Sonoma County, Cline Cellars and Jacuzzi Family Vineyards, so they aren’t strangers to the spirits business though Tonopah Brewing Co. is their first exploration into beer making.

While Lance works at the brewery in Tonopah, Eddie Silveira holds down the fort at Pigeon Head Brewery as he learns to become a brewmaster too. And at Rebel Malting, Lance’s father does most of the work now.

For the near future, Tonopah Brewing Co. will not distribute outside of the brewpub. Eventually they want to start bottling the beers but it may be a while before the Reno area receives any bottles or kegs. With the Mizpah and brewery now in full swing, a weekend trip to the middle of the state for the latest and greatest brew is only four hours away.

For more on this story, check out DrinkableReno.com.