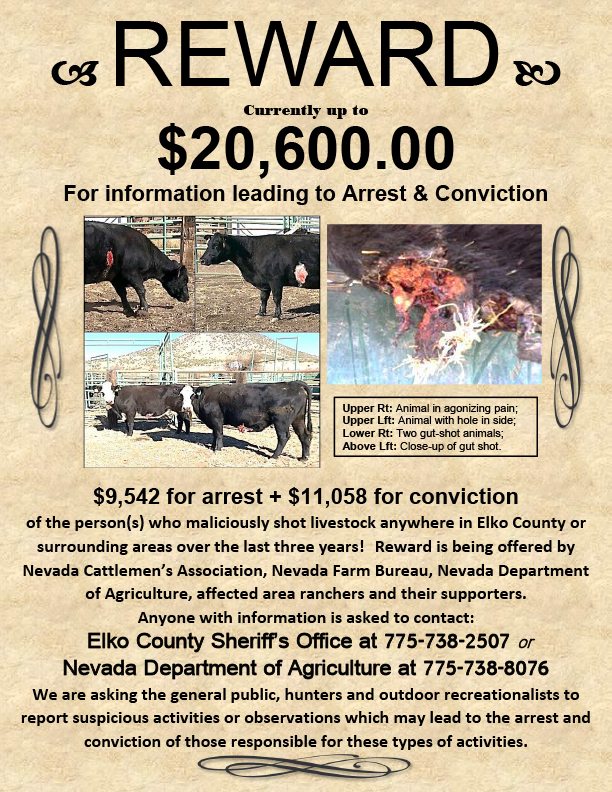 By Ron Torell
President of the Nevada Cattlemen’s Association

The Nevada Cattlemen’s Association, Nevada Farm Bureau, Nevada Department of Agriculture and affected ranchers are asking for the public’s assistance in apprehending individuals responsible for the malicious shootings of over fifty-seven (57) head of cattle across northern Nevada, so far found north of Wells, in the Suzie Creek area near Elko and the Martin Basin Area north of Paradise Valley in Humboldt County. These 2014 shootings have been occurring since mid-summer and the latest find was Wednesday, October 15. In the wake of these shootings more injured and dead animals may be found as cattlemen continue their fall gather.

This type of malicious act is a felony punishable by imprisonment and large monetary fines including restitution for damages. Donations are being collected and pledged to the Reward Trust Fund held by the Nevada Cattlemen’s Association for the arrest and conviction of the guilty party(s) and to date totals $20,600. Cattle shootings in Northern Elko County near Tuscarora and the Midas area have occurred over the past three years and these recent shootings seem to be an extension of that activity.

Herders living with and caring for livestock has been a staple of human activity and survival since the world began. These animals are not just part of the business end of ranching that supports our states’ economy. And these are not just “dumb animals”. These living, breathing creatures are known individually to their owners, some may belong to ranch children that raised them, and while not lap-pets, they are just as beloved by their caretakers as our city cousins’ dogs, cats and other furry family members.

It is estimated the value of animals maimed and destroyed so far may exceed $250,000, not to mention the in-humane treatment and suffering of these animals. Land owners and law enforcement are using every tool at their disposal. However, eyes on the ground in the form of responsible outdoorsmen and women are most often the best source of key information.

Since 87% of Nevada’s land is under federal control and often very remote and hidden we are asking the general public, hunters, outdoor recreationalists, cowboys, mountain bikers, hikers, picnickers, OHV’ers and/or anyone with any kind of tip or observations to please report suspicious activities or persons to the local County Sheriff. One small piece of evidence may provide the clue needed leading to the arrest and conviction of those responsible for these atrocious acts of animal cruelty and agri-terrorism.

Ranchers own strategic private property – lands which often provide the only access to many of Nevada’s public lands. These vicious acts of agri-terrorism, such as randomly shooting living animals, and leaving them to suffer and the continuous malicious destruction of fences, removal and destruction of gates and wanton vandalism of other elements of private and business property often prompts land owners to restrict or close off completely access across their private property to federal lands for recreation, hunting and other outdoor activities.

Nevada’s livestock industry recognizes that 99% of recreationalists, hunters and outdoorsmen and women are very responsible and courteous individuals who respect another’s private property, their landscape and the environment. We appreciate that. However, we are asking for help from the 99% to put a stop to the death and mutilative destruction of living, breathing animals done by the 1% of irresponsible derelicts.

With the general public’s assistance the Nevada Cattlemen’s Association, Nevada Farm Bureau and Nevada Department of Agriculture are confident the perpetrators of these senseless acts of animal cruelty will be caught. Anyone with information is encouraged to contact the Elko County Sheriff’s Office at 775-777-2507 or the Nevada Department of Agriculture at 775-738-8076. Contributions to the Reward Trust Fund are being collected by the Nevada Cattlemen’s Association, P O Box 310, Elko, NV 89803, or call 775 738 9214.