Eureka art show a success at the Court House Gallery 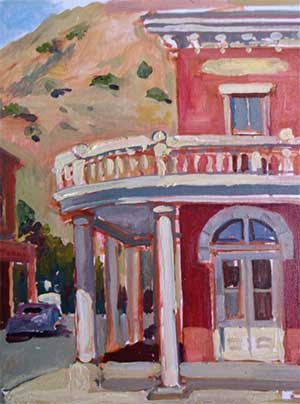 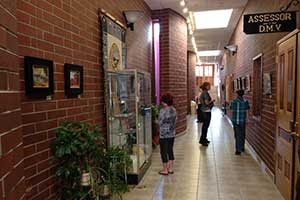 EUREKA — Reno painter Erik Holland says he came to Eureka to “paint the town” over several recent visits, concluding with a show and sale on Saturday, October 11. Twenty-five of Holland’s Eureka canvases were hung in the Court House Gallery on Main Street, six were sold at the artisty’s reception on opening day.

“I’ve had the greatest time here,” Holland said at the Saturday afternoon reception. “As a painter I fell in love with this place, and as a stranger in town I was given a gracious welcome.”

Among the guests at the reception was a man who had seen a notice of the show in the Elko paper and came down to buy a painting of the Eureka Opera House. “That told me something very positive about culture in rural Nevada,” Holland said. As he painted from first light to last light each day, Holland became something of a familiar sight around town. He was accosted at Raine’s Market one day by a man who looked at him, cocked his head and said, “You’re that guy, aren’t you?”

“I was painting downtown one day when a troop of Boy Scouts came by and as with so many people, we spent a few minutes talking about what I was doing,” Holland said. “I was happy that one of them came to the show and brought his mom, and even happier when he asked her to get one of the paintings I did of the Jackson House. Since I’ve been here I’ve come to realize what a strong impression that beautiful old hotel makes on people. People love it . . . there’s been a lot of life lived there.”

Holland’s paintings portray many of Eureka’s other iconic buildings as well: the County Court House, the General Store, the Eureka Opera House, the Jackson House, the Doll House and the Colonnade Hotel as well as landscapes and residences around town. The paintings will remain on display in the Court House Gallery through the holidays, and anyone wishing to make a purchase may do so. Details are posted at the Gallery.

“We’re planning to introduce Eureka to more of the fine plein air artists in Nevada” said Robin Cobbey who arranged the show. “We provide them lodging at the Doll House so they can concentrate on ‘painting the town’ just as Erik did, and when there’s enough new work we’ll have a show.” In between the artists’ visits, the little blue house on the hill overlooking downtown Eureka is available as a vacation rental. For rates, and information on future shows, call Robin at 775-843-6217.