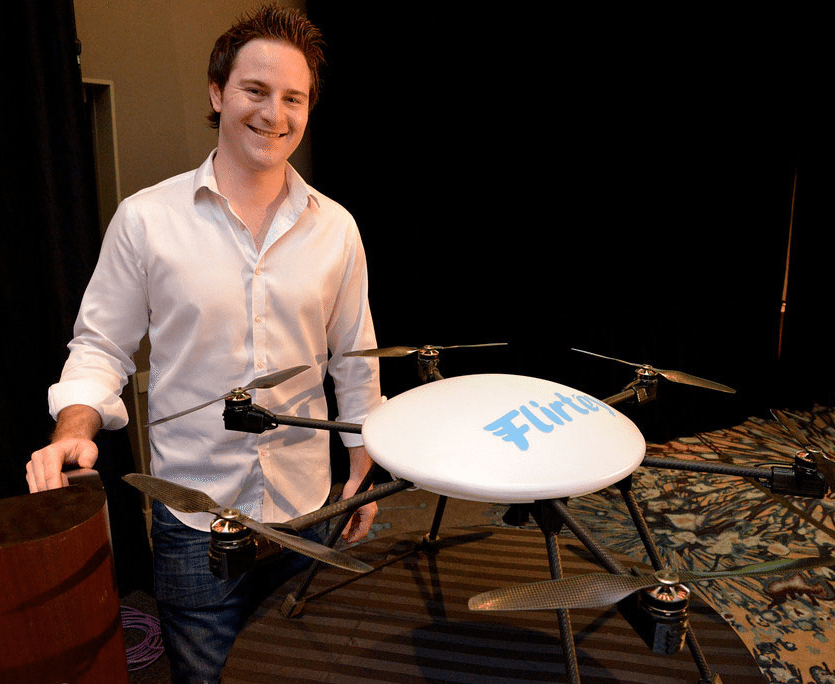 Australian-designed commercial UAVs are winging their way to the United States for high-tech testing at the University of Nevada, Reno as part of a new research and development partnership with a commercial delivery, unmanned-aerial-vehicle start-up company. The company, Flirtey, conducted successful fully automated drone textbook-delivery tests in Sydney, Australia earlier in the year.

“Flirtey is partnering with the University of Nevada, Reno to pioneer an industry, to develop safe UAV delivery technology and to position ourselves as a first mover when the U.S. commercial market opens up,” Matthew Sweeny, CEO of Flirtey, said.

Flirtey has based its U.S. operation on campus, and will be using the University’s indoor flight facilities to test aerial robots. The partnership is the first to bring UAV industry research and development to the campus, and sets the stage for additional alliances.

Those alliances may be formed under the umbrella of the University’s Nevada Advanced Autonomous System Innovation Center, a collaborative organization created to spur economic development and commercialization of technologies in autonomous systems. Through innovation, entrepreneurship and industry collaboration, such as with Flirtey, NAASIC is exploring development of land-based, aerial and stationary robotic systems (such as industrial robots), advanced manufacturing systems, driverless road vehicles and underwater robots.

NAASIC, led by the College of Engineering, involves the Economic Development Authority of Western Nevada, the Governor’s Office of Economic Development, the manufacturing industry, as well as K-12 and higher education programs, to enhance Nevada’s workforce.

“NAASIC will take up an entire floor in our new 25,000-square-foot Innovation Center in downtown Reno when it is completed,” Mridul Gautam, vice president for research and innovation for the University, said. We’re very excited that Flirtey is bringing its research and innovation to Reno and on campus. We look forward to collaborating with Flirtey as well as other innovators in the NAASIC space to pioneer this industry together.”

“The collaboration with the University is an important step in Flirtey’s growth by allowing us to use their facilities and test Flirteys on campus,” Sweeny said. “Nevada is one of just six locations in the U.S. approved by the FAA for UAV testing, and with its close proximity to Silicon Valley, budding tech scene, and the state’s strong aeronautical history, Reno is positioned to become the biggest little city in the world of UAV space.”

The University will take an equity stake in Flirtey, one of the world’s first unmanned aerial delivery companies, as part of the deal. It allows Flirtey to use the University’s research labs for design and manufacture, to collaborate on research with faculty and to access indoor facilities to support Flirtey’s UAV development and growth.

Flirtey has now conducted over 100 successful test deliveries of textbooks outdoors during its test phase in Sydney with the textbook company Zookal.

“I am excited to welcome Flirtey to the Nevada family. The partnership between Flirtey and the University of Nevada, Reno demonstrates a commitment to our shared vision of building a vibrant and sustainable economy,” said Governor Brian Sandoval. “The collaboration between Flirtey and UNR will send a strong message that Nevada is a leader in this emerging industry not only because of our unique environment, but also because we are educating and training the aviation workforce of the future.”

“The opportunities this minor degree program brings to student education and competitiveness are exciting,” Manos Maragakis, dean of the College of Engineering, said. “Such a program will be instrumental in enhancing the state’s ability to increase its workforce in an area that has been strategically identified as one of its economic development priorities.

“The partnership with Flirtey is an important example of the College’s mission to contribute to the economic growth of the state and the nation, and it offers an opportunity for the University’s graduate engineers from the new Unmanned Autonomous Systems minor degree to get hands-on experience with one of the world’s first movers in the UAV industry.”