Two Reno-Tahoe athletes to receive more than $6,300 in grant funding

TRUCKEE — In February 2013 Steven Jacobo, a Gardnerville native, was snowboarding at Sierra-at-Tahoe when he hit an unfamiliar jump that threw him out of control off of a 25 foot drop off. He landed directly on his back, resulting in a burst fracture of his T9 and T10 vertebrae spinal cord injury. Jeff Andrews, a resident of Truckee, Calif., was snowboarding at Sugarbowl Resort in March, 2014, when he over-shot a jump in the terrain park. The resulting crash burst fractured his C-5 vertebrae into his spinal cord at the C-5/C-7 level. This is where the High Fives Foundation comes in. 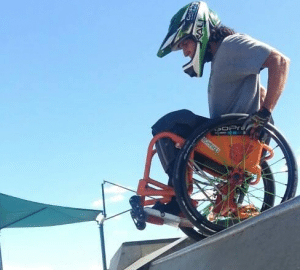 Since his 2013 injury, Jacobo has been working tirelessly in the gym to ensure that his life post-injury is the easiest that it can be. Along with spending countless hours on his fitness, Steven has been searching for an adaptive action-sport where he can experience the positive thrills found from snowboarding. In July of this year, after discovering the sport of “chairskating,” Steven received a board-approved grant for $2,100 from the High Fives Foundation to be used toward the purchase of a Box Wheelchairs WCMX freestyle chair.

The July grant for $2,100 awarded to Jacobo will be used toward the purchase of a Box Wheelchairs WCMX freestyle chair. He is a first time grant recipient of the Foundation. 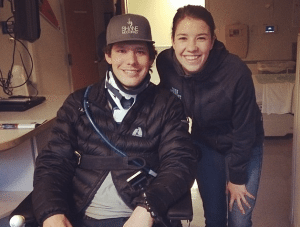 The August grant for $4,250 awarded to Tahoe-based Athlete Jeff Andrews will be used for six months of spinal cord injury specific personal training at the Sacramento, Calif. SCI-Fit facility. This is the second board-approved grant that Andrews has received since becoming a High Fives Foundation Athlete in April 2014. To date he’s received a total of $5,613 that has been used toward his recovery..

Since the Foundation’s inception in January, 2009, the Winter Empowerment program service has assisted 61 athletes from 18 states in nine respective funding categories which include: living expenses, insurance, travel, health, healing network, adaptive equipment, winter equipment, programs and stoke (positive energy, outlook and attitude). In 2014, the High Fives Foundation has set a budget of disbursing $196,000 via board-approved grants through the Winter Empowerment Fund. Thus far in 2014, 16 High Fives Athletes and two organizations have been awarded a sum of 20 board-approved grants for a total of $168,000..

In the months of July and August the High Fives Foundation distributed funds to eight Winter Empowerment Athletes: Steven Jacobo of Gardnerville, Nev., Jeff Andrews of Truckee, Calif., Brandon Pitzer of Portland, Ore.along with Cody Walker, Ben Hulin and Terry Hopkinson of the Salt Lake City, Utah-area. The Foundation’s Board of Directors Grant Selection Committee approved a total of $33,262 to be used toward the Healing Network and Adaptive Equipment funding categories.