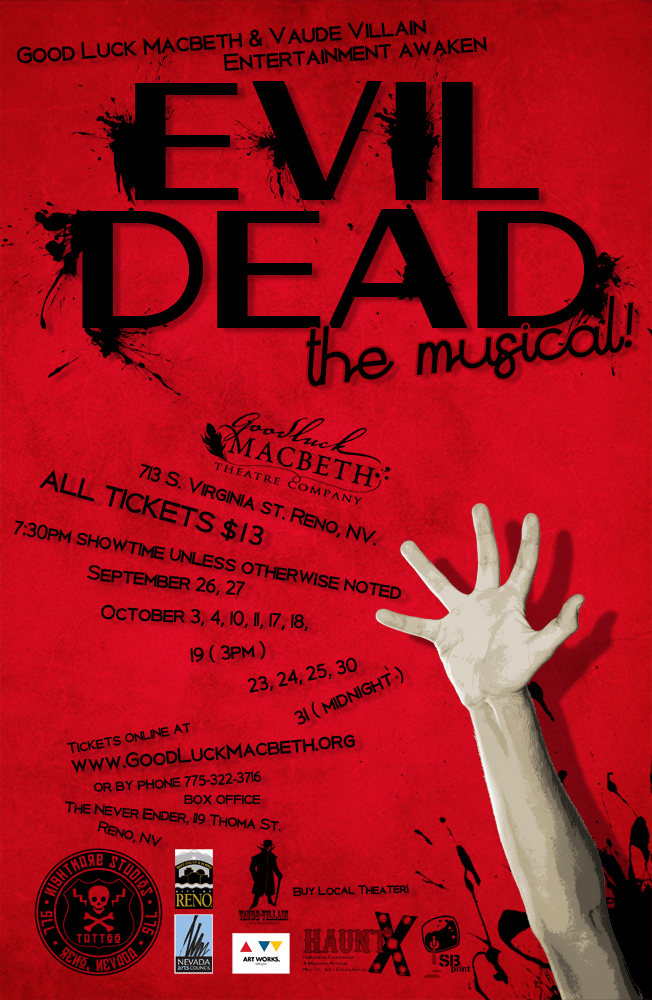 “Evil Dead“, the iconic 1981 horror film, maintains a fervent and die-hard fan base that has only continued to grow over the years. With the recent remake of the film last year, fans – old and new – have fallen in love with the ghoulish allure of “Evil Dead.”

John Fredrick and Ashley Marie James , co-founders and creators of Vaude Villain Entertainment, met while performing in a local musical production and immediately created a bond over their mutual love of “Evil Dead: The Musical.”

Fredrick and James made it their shared mission to bring it to Reno audiences. James stated, “The production features fantastic music, hilarious one-liners, gore and all of the camp of the original movies.”

Christopher Daniels, Managing Director for Good Luck Macbeth, feels, “the production is a perfect fit for the Halloween season and a beautiful way to close out our 2014 season.”

Audiences can expect a truly immersive theatrical experience.  People sitting in the first couple rows of the theater will be knee-deep in our “splatter zone” and can expect to get sprayed with fake blood – no worries, t-shirts and trash bags are available for purchase – and demonically-possessed trees shall serve up a whole host of concessions.

“Evil Dead: The Musical” premieres at Good Luck Macbeth Theater – 713 S. Virginia Street – September 26 at 7:30 p.m. and runs through October 31. Tickets are $13 and can be purchased at Never Ender, at the door, or at www.goodluckmacbeth.org. The show is rated R for explicit language and very strong adult themes.