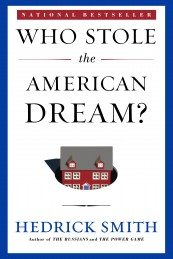 Smith signs and discusses his newest book, Who Stole the American Dream?, which has been hailed by critics for its brilliant analysis of political and economic trends and changes in the U.S. over the past 40 years.

Pulitzer Prize winner Hedrick Smith’s new book is an extraordinary achievement; an eye-opening account of how, over the past four decades, the “American dream” has been dismantled and we became two Americas.

In his bestselling The Russians, Smith took millions of readers inside the Soviet Union. In The Power Game, he took us inside Washington’s corridors of power.

Smith now takes us across America to show how seismic changes, sparked by a sequence of landmark political and economic decisions, have transformed America.

As only a veteran reporter can, Smith fits the puzzle together, starting with Lewis Powell’s provocative memo that triggered a political rebellion that dramatically altered the landscape of power from then until today.

This is a book full of surprises and revelations—the accidental beginnings of the 401(k) plan, with disastrous economic consequences for many; the major policy changes that began under Jimmy Carter; how the New Economy disrupted America’s engine of shared prosperity, the “virtuous circle” of growth, and how America lost the title of “Land of Opportunity.”

Smith documents the transfer of $6 trillion in middle-­class wealth from homeowners to banks even before the housing boom went bust, and how the U.S. policy tilt favoring the rich is stunting America’s economic growth.

This book is essential reading for all of us who want to understand America today, or why average Americans are struggling to keep afloat.

Smith reveals how pivotal laws and policies were altered while the public wasn’t looking, how Congress often ignores public opinion, why moderate politicians got shoved to the sidelines, and how Wall Street often wins politically by hiring over 1,400 former government officials as lobbyists.

The event is at Sundance Books and Music, 121 California Avenue, Reno, in Nevada. For more information: 775-­786-­1188, www.sundancebookstore.com, [email protected]

Hedrick Smith, Pulitzer Prize winning former New York Times reporter and editor and Emmy award-­winning producer/correspondent, has established himself over the past 50 years of his career as one of America’s most distinguished journalists.

In 26 years with The New York Times, Mr. Smith covered Martin Luther King Jr and the civil rights struggle, the Vietnam War in Saigon, the Middle East conflict from Cairo, the Cold War from both Moscow and Washington, and six American presidents and their administrations.

In 1971, as chief diplomatic correspondent, he was a member of the Pulitzer Prize winning team that produced the Pentagon Papers series. In 1974, he won the Pulitzer Prize for International Reporting from Russia and Eastern Europe.

This event is made possible through a partnership with the University of Nevada, Reno’s Reynolds School of Journalism, Nevada Humanities, and with support from the Nightingale Family Foundation.