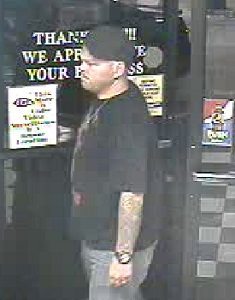 On August 31, 2014 Reno Police Officers were dispatched to the 3000 block of Kauai Court in South Reno after a citizen located a found purse. Officers were able to locate the female who owed the purse who told Officers that it must have been taken from her residence the night before. Officers then located an unlocked window to the female’s residence that was possibly used for the suspect to enter the apartment.

Reno Police Department Burglary Detectives assigned to the case were able to obtain surveillance of an unknown male suspect who was caught on store security video using the victim’s stolen credit cards. The suspect is described as white male adult in his late 20’s to early 30’s with a stalky build, wearing a black baseball cap, black shirt and light colored pants. The unknown male also has numerous tattoos on both arms down to his wrists. The unknown male was accompanied by a heavy set white female adult (unknown age) with brown hair, wearing a black tank top and black pants. The two were observed to be driving a silver 4 door passenger car.