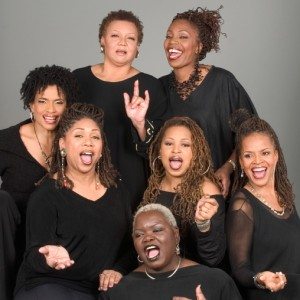 Rooted in African American history and culture and celebrating the inspirations of spirituals, blues, folk, gospel, jazz, popular and world music, the five incredible vocalists of Sweet Honey in the Rock entertain and unite communities with the common language of song.

The New York Times says the group’s a cappella voices “soar in a spectrum of styles few other ensembles could match.” For 40 years, Sweet Honey has shared many voices to honor community, as artists, activists and humanitarians.

One of Sweet Honey’s founders, who retired from the group in 2004, Dr. Bernice Johnson Reagon first became aware of the political power – the “rock” she calls it – of song while in jail in 1961 for her participation in a civil rights march in her Albany, Georgia, hometown.

After her release, she became a member of the original Student Non-violent Coordinating Committee Freedom Singers and a leader in the civil rights movement, traveling the country spreading its songs and message.

Sweet Honey began performing in 1974 and has been committed to humanitarian causes and community activism through music ever since.

Since 1981, Sweet Honey has welcomed the deaf and hearing impaired with the ensemble’s own sign language interpreter during every one of their performances.

The ensemble is comprised of founders Carol Maillard and Louise Robinson, Aisha Kahlil, Nitanju Bolade Casel and sign language interpreter Shirley Childress, who learned from her deaf parents and has interpreted for such authors as Maya Angelou, Alice Walker and Audrey Lorde.

The original members of Sweet Honey drew the name from the first song they learned, “Sweet Honey in the Rock,” based on a Biblical psalm. “Sweet Honey speaks of a land that is so rich when you break the rocks open, honey flows,” Robinson explains. “And we thought it was something like us African-American women… strong like a rock, but inside [there’s] honey – sweet.”

For more about “Sweet Honey in the Rock ~ 40th Anniversary,” visit www.sweethoneyintherock.org

For individual or season tickets and more about the Performing Arts Series visit www.unr.edu/pas .