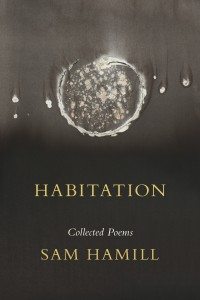 Drawn from fifteen volumes of celebrated poetry, whether in brief haiku-like poems or long-ranging narratives, Habitation presents a lyrical voice that is unique in American poetry today. Jim Harrison has declared, “Hamill has reached the category of a National Treasure,” and Hayden Carruth has written, “[His] poetry is no less than essential.”

Sam Hamill was born in 1943, probably in Northern California. Orphaned during the war, he was adopted and grew up on a Utah farm. He is the author of seventeen previous volumes of poetry, four collections of literary essays, and some of the most distinguished translations of ancient Chinese and Japanese classics of the last half century.

He is Founding Editor, and for thirty-two years was Editor, at Copper Canyon Press. He taught in prisons for fourteen years and has worked extensively with battered women and children.

In 2003, declining an invitation to the White House, he founded Poets Against the War, compiling the largest single-theme poetry anthology in history: 30,000 poems by 26,000 poets. He has been awarded fellowships from the National Endowment for the Arts, the Guggenheim Foundation, the Woodrow Wilson Foundation, the Mellon Fund, and the Japan–U.S. Friendship Commission.