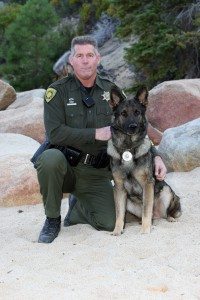 K9 Pascha was born in Prague on January 31, 2005.  He began his tracking, obedience and protection training in Czechoslovakia and Holland before making the journey to the Vohne Liche Kennels in Denver, Indiana.

Pascha quickly earned the reputation as a sound and reliable police service dog.  He was certified in patrol, narcotics, tracking and evidence article searches. Pascha also worked with the Sheriff’s Office SWAT team.

Pascha is credited for the apprehension of many violent criminal subjects along with locating more than a thousand pounds of marijuana and hundreds of pounds of methamphetamine, cocaine and heroin.

His tracking abilities have provided a critical service to the community such as assisting search teams with locating missing and endangered subjects, or helping local law enforcement find evidence crucial to major investigations.

Additionally, Pascha made several hundred appearances at various school and public demonstrations, touching the lives of many throughout our community in a very positive way.

K9 Pascha retired from the Washoe County Sheriff’s Office in 2013. Having a K9 in the family has its exciting moments. “What makes a K9 a great dog to work with often transforms into entertainment at home. Most pets don’t climb on dining room tables, love loud fireworks and think Halloween is training” Sgt. Jones said with a smile. “He would search or open all our UPS boxes and Christmas gifts; he even knew how to open doors. Pascha was very much a part of our family.”

The Second Annual Washoe County Sheriff’s Office K9 Run is scheduled for this Saturday, September 27 at the Summit Mall in south Reno. Reno Running Company sponsors the K9 Run to help raise funds for the equipment and training the K9 teams need to fulfill their mission to help keep our community safer. For more information and to register visit http://www.renorunningcompany.com/

There are nine K9 teams currently assigned to the Washoe County Sheriff’s Office. Canines provide invaluable support to public safety through their highly specialized training and unique ability to locate narcotics, explosive devices and fugitives. They help their human partners with the apprehension of suspects who attempt to evade arrest by concealing themselves, or who pose a threat to the deputy or members of the public.  For more information, visit washoesheriff.com.