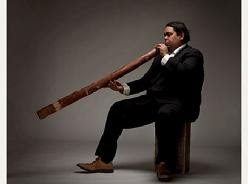 William Barton, one of the world’s masters of the didgeridoo, performs with the Reno Chamber Orchestra in the first concerts of its 40th season Saturday, September 20 at 7:30 p.m. and Sunday, September 21 at 2 p.m. at the University of Nevada, Reno’s Nightingale Concert Hall.

William Barton is widely recognized as one of Australia’s leading didgeridoo players and composers, and is a powerful advocate for the worldwide perception of his cultural traditions.

Barton performs his own composition, Birdsong at Dusk, as well as From Ubirr by Australian composer Peter Sculthorpe alongside the Orchestra. Touring internationally since he was fifteen years old, Barton played his first classical concert with the Queensland Symphony when he was seventeen.

He has received Honorary Doctorates of Music from Griffith University, Queensland and the University of Sydney, Australia, and was one of three composers commissioned by the 2008 Beijing Olympics Opening Ceremony Committee for the Australian segment.

Maestro Theodore Kuchar, entering his twelfth season as RCO music director and conductor, will also lead the Orchestra in the “Water Music” by Georg Phillip Telemann and the “Scottish” Symphony by Felix Mendelssohn. Kuchar is the most recorded conductor of his generation, with over 100 albums on the Naxos, Brilliant Classics, Marco Polo, and Ondine labels.

Ticket prices for these concerts range from $22 to $45 for adults and $5 for eighteen years old and under or full-time students. Tickets and more information are available at RenoChamberOrchestra.org or by calling 775-348-9413.

Celebrating its fortieth year of music, the Reno Chamber Orchestra was founded in 1974 by its conductor emeritus Vahe Khochayan in collaboration with several musician colleagues. The RCO has won the title of Best Performing Arts Group in the Reno Gazette-Journal’s annual “Best of Reno” survey, Reno Magazine named the RCO one of its Best of Reno Top 101 in 2009, and Truckee Meadows Tomorrow awarded the RCO its prestigious Silver Star Award “for improving the quality of life in the Truckee Meadows.”

Along with its regular season of Orchestra concerts, each December the RCO presents the Nevada Chamber Music Festival, featuring some of the finest musicians in the world performing chamber music. The Orchestra’s educational and outreach events include the annual College Concerto Competition, Nevada’s only music competition for college students. Over its forty years, some of the world’s most famous performers have appeared with the RCO, including Leonard Nimoy, Itzhak Perlman, Roger Wagner, Edgar Meyer, and Pepe and Angel Romero.