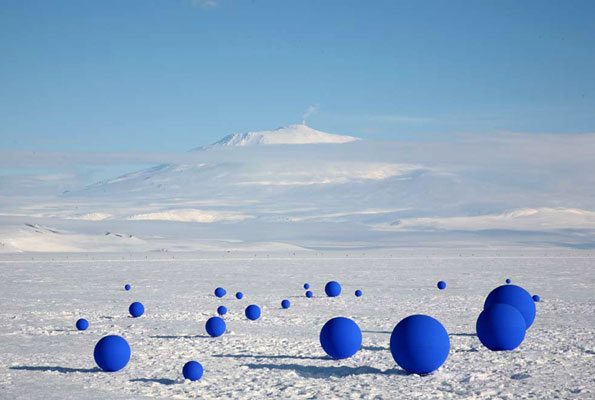 For more than three decades, artist Lita Albuquerque has explored what she calls the “web of interconnectedness” that permeates the cosmos. She has produced numerous large scale Land Art projects to explore this intimate, spatial relationship between the universe and its inhabitants, central themes in her 2006 Land Art installation on Antarctica’s Ross Ice Shelf. A new exhibition, Lita Albuquerque: Stellar Axis, contains photographs, a film, objects, and archive materials from this project. The show opened today at the Nevada Museum of Art, 160 West Liberty Street, Reno, Nev.

Originally funded by the National Science Foundation, Albuquerque’s Stellar Axis was installed on the Ross Ice Shelf on December 22, 2006—concurrent with the Summer Solstice in the Southern Hemisphere. With the help of NSF astronomer Simon Balm, Albuquerque created a star map of the ninety-nine brightest stars and their constellations visible at the South Pole during the six-month day, creating a reverse sky onto the ice. She deployed ninety-nine ultramarine blue fiberglass spheres of varying diameters positioned on the ice, from ten inches to four feet, to represent the relative magnitude of the stars. The project imaginatively links the stars through both poles as a shaft of light aligned with the rotational axis of the Earth, creating a double helix that is a metaphor for the conveyance of information, a kind of stellar DNA.

Stellar Axis was the first large-scale artwork created in Antarctica. Considered a milestone of contemporary Land Art, the installation was regarded as both a stunning and ecologically sensitive intervention on the continent. The project received international acclaim.

Recognizing the mission of the Nevada Museum of Art Center for Art + Environment to explore the creative interactions between humans and their natural, built, and virtual environments, Albuquerque gifted the complete archives from her Antarctica project to the C A + E in 2010. The large archive contains the complete record of the project, including correspondence, grant applications, maps, journals, photographs, video, and three spheres, two that were on the ice and one pristine model. It is from this archive collection that the new exhibition materialized, taking on new life with the addition of signature pieces.

The Nevada Museum of Art houses the only Center for Art + Environment in the world, containing one of the largest polar art and archive collections of any academic institution or museum. C A + E Director William L. Fox, a writer and research scholar, wrote the complete art history of Antarctica, underscoring the synergy between Albuquerque’s project and the Museum. Fox has penned one of the major essays for the book accompanying the new exhibition.

Lita Albuquerque: Stellar Axis is a feature of the 2014 Art + Environment Season, a museum-wide exhibition effort that provides rich context for the Museum’s third Art + Environment Conference. This three-day gathering of global artists and scholars takes place Oct. 9 – 11 at the Nevada Museum of Art. During the opening evening activities, Thursday, Oct. 9, 6 – 7 pm, Albuquerque will hold a book signing of the new publication in the Donald W. Reynolds Atrium. She will follow this signing with one on November 1 at Kohn Gallery in Los Angeles.

Lita Albuquerque: Stellar Axis will be exhibited now through January 4, 2015 at the Nevada Museum of Art, Donald W. Reynolds Center for the Visual Arts, E. L. Wiegand Gallery located at 160 West Liberty Street in downtown Reno. In January 2015 the show will travel to Fisher Museum at the University of Southern California, Los Angeles, Calif.