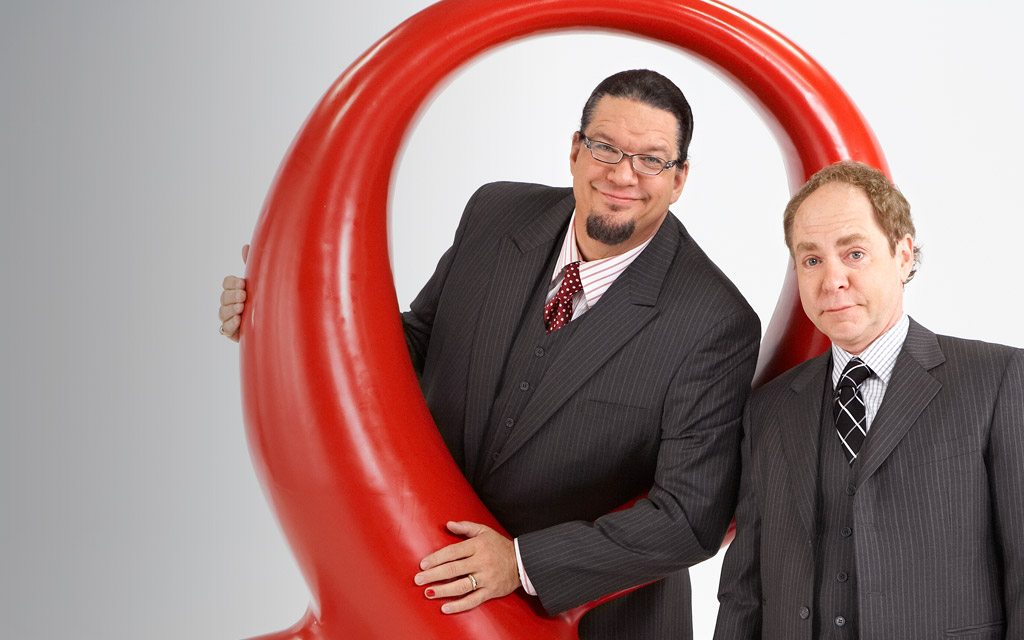 Penn and Teller are among the performers at star-studded September 22 event leading up to Nevada Day.

The Smith Center will celebrate the Nevada Sesquicentennial with a concert event showcasing the Silver State’s very own entertainment featuring extraordinary performers from all around the state on Monday, September 22 at 7 p.m. at the Donald W. Reynolds Hall inside The Smith Center.

The ultimate variety concert will feature some of the best of the Las Vegas Strip and around the Silver State.  The following are scheduled to appear thus far: Cirque du Soleil, Jubilee!, Jersey Boys, Million Dollar Quartet and Penn and Teller. Additionally, singers Human Nature, Clint Holmes, Frankie Moreno and Bob Anderson will be accompanied by The Lon Bronson Band and the Las Vegas Mass Choir.

The evening will also include an inspiring reading by Nevada Sesquicentennial Honorary Poet Waddie Mitchell and tributes to Frank Sinatra, Mark Twain and Liberace.

Las Vegas legend Jerry Lewis is also scheduled to appear, along with Las Vegas residents Susan Anton, Antonio Fargas, Mark Shunock  from “Rock of Ages” and Wayne Newton.  More artists will be announced in the near future.

“Nevada’s 150th birthday will be long remembered as one of the grandest celebrations in our state’s history – and the Smith Center concert will be one of the crowning events,” said Lieutenant Governor and Nevada 150 Chairman, Brian Krolicki.

“By the end of our year-long celebration commemorating Nevada’s Sesquicentennial we will have had over 400 specially recognized events honoring the rich history and culture of our extraordinary state and paying tribute to the many characters who have made Nevada their home.  What an exhilarating and fitting year it has been,”  Krolicki concluded.

“Nevada has a rich and eclectic history that started with President Lincoln during the Civil War,” said Myron Martin, president and CEO of The Smith Center and Nevada 150 Commissioner. “What better way to commemorate the state’s one hundred and fiftieth anniversary than by inviting the entertainment community to come together to celebrate Nevada’s cultural heritage in Las Vegas – The Entertainment Capital of the World?”

Tickets start at $25 and net proceeds will benefit The Smith Center’s education outreach programs. Tickets can be purchased at The Smith Center Box Office, located at 361 Symphony Park Avenue, by phone at 702-749-2000 or 808-326-6868 (TTY) and online at www.TheSmithCenter.com.

Nevada’s Sesquicentennial, the 150th anniversary of Nevada’s admission to the Union, will provide opportunities for celebration and reflection as we come together statewide to commemorate our shared history and build a foundation of cultural appreciation for generations to come.  Nevada’s one of a kind and diverse history will be celebrated throughout the state for an entire year in order to promote pride in the shared heritage of all Nevadans.  Nevada’s Sesquicentennial celebration will commence on Nevada Day 2013 and conclude with an expanded Nevada Day celebration October, 2014. For more information, please visit www.nevada150.org.

The hallmark of downtown Las Vegas’ 61-acre urban development known as Symphony Park, The Smith Center for the Performing Arts is a public-private partnership that opened in March 2012. Heralded as the city’s Heart of the Arts®, The Smith Center is an architectural triumph and long-awaited cultural achievement that educates and entertains the citizens of Southern Nevada. The $470 million world-class performing arts center offers a blend of performances by resident companies, first-run touring attractions, lectures and internationally acclaimed performers in music, theater and dance. The five-acre campus features four performance spaces including the 2,050-seat Reynolds Hall, the 258-seat Cabaret Jazz club, the 250-seat Troesh Studio Theater and the 1.7-acre Donald W. Reynolds Symphony Park for outdoor concerts. Additionally, the campus is home to the Discovery Children’s Museum that opened in March 2013. For more information about The Smith Center for the Performing Arts, please visit www.TheSmithCenter.com. Keep up with news and events on Facebook and follow The Smith Center on Twitter at @SmithCenterLV.