Space industry to get support from Nevada community colleges 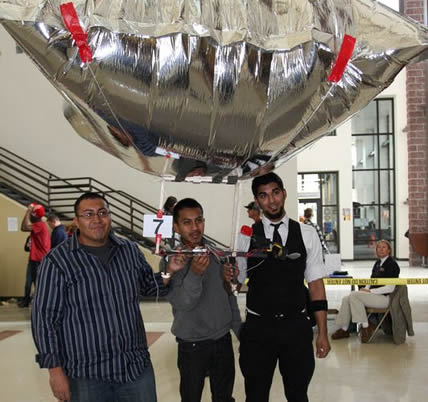 LAS VEGAS – Nevada’s private space industry has been making headlines in recent months as private companies continue to blaze the trial with new partnerships with NASA and other leading private space-based initiatives. But now, Nevada’s students are about to be the next in line to take a bold step into the unknown.

The Nevada System of Higher Education (NSHE) was awarded funding of $500,000 through the NevadaNASA Space Grant Consortium (NVSGC) for the creation of a new program that will change how Nevada’s community college students learn, all the while planting the seed for an education system that will help staff Nevada’s future space and science-related industries.

Titled “A Community College Partnership Creating a Community of Practice Model to Engage and Retain Minority Students,” the program will create a community of practice (CoP) at each campus involved in the program. Though the term CoP is a fairly newly coined term, the concept isn’t.

“Communities of practice are how humans have traditionally learned since the dawn of time,” said Dr. Darren Divine, vice president of academic affairs for College of Southern Nevada. “People who share similar interests create communities around those interests; students have been doing this for quite some time via study groups. However, this program will take that concept to a whole new level, adding a virtual element that will eliminate distance as an obstacle.”

With a CoP established at each of the four participating campuses — College of Southern Nevada, Western Nevada College, Great Basin College and Truckee Meadows Community College — the program will link each group to the others with monthly video conferences. Starting in the spring of 2015, Students will receive significant participant (scholarship) support, individualized degree planning and weekly interdisciplinary biological and physical science study and inquiry as they work towards Associate of Science degrees. This program will support faculty as they present science content in ways that impact student persistence and graduation attainment.

“Students can learn a great deal from one another — sometimes even more than from the classroom itself,” Divine said. “This program will give them access to students from across the state, and as a result, varying perspectives they wouldn’t have had access to otherwise.”

But while the initial effort is concentrated on the educational effort, the potential for Nevada’s future space industry hasn’t been overlooked. Nevada’s business community has quietly helped position the state as an emerging space-related economic hub. Bigelow Aerospace, which is pioneering work on expandable space station modules, and Sierra Nevada Corporation, which is currently developing an orbital spacecraft called the Dream Chaser, have locations in North Las Vegas and Sparks, respectively.

“Creating a direct path from Nevada’s higher education system to Nevada’s space industry is of critical importance,” said NSHE Chancellor Dan Klaich. “Space is an industry that’s only beginning to take shape. If we can create an environment that will attract this industry to Nevada, it can be the beginning of a high-tech boom in the state, bringing countless jobs and revenue with it. Creating these educational initiatives is where that process begins, because without a workforce to supply that industry, companies will go elsewhere.”

The overall mission of NVSGC is to create and expand opportunities for Nevada students and faculty to be active and valued participants in the nation’s NASA aeronautics and space programs. The consortium supports the national agenda to develop a strong math, science, engineering and technology education base through coordinated efforts of collaboration to engage community, state and universities throughout Nevada focusing on research and training programs, supporting students in internships in NASA academies and partnering with industry and local governments. By doing so, NVSGC contributes to and facilitates basic science discoveries and technology development that fosters Nevada’s economy and helps enable the space exploration missions of the U.S. government and private sector.