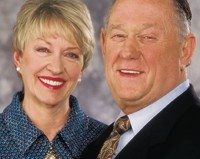 Catholic Charities of Northern Nevada will present their annual humanitarian award to Bob and Nancy Cashell at this year’s 2014, “Plates to Ease Poverty” dinner. The event will hosted August 25th at 5:30 at the Atlantis Casino.

Catholic Charities choose to honor the couple for their support of the poor and homesless.

Peter Vogel, executive director at Catholic Charities, said Mayor Cashell and Nancy are a couple that truly demonstrates what it means to be humanitarians. Vogel said he looks back fondly at the many years Mayor Cashell has stood outside in the cold at the annual Thanksgiving food distribution events and handed out turkeys to local families so they could have a special holiday meal at home.

“Instead of pushing aside the poverty issues our area faces, the Mayor and his wife chose to confront those issues firsthand,” Vogel said. “Our community wouldn’t be where it is today without their dedication to the poor and homeless.”

One of the mayor’s highlights was establishing a safe place to for homeless to sleep at night. This idea lead to the development of Community Assistant Center, on Record Street in downtown Reno. This multimillion dollar center provides a shelter for Reno’s homeless population.

Cashell, in his typical demeanor, gave all the credit for the project to the city council staff.

“It’s not me who should be honored, but it’s all of the council members I had working with me. It was truly their vision. Every one of them felt that showing compassion for the homeless was a priority. They are really the people we need to be thanking,” said Mayor Cashell, in a statement.

Cashell fought a tough battle over the location of the shelter but in the end it made sense to have the shelter near Catholic Charities and other social service centers.

Cashell credits his wife’s strong support and gentle nudging as influencing his continuing effort to listen to the community and also to continue to advocate for the less fortunate population.