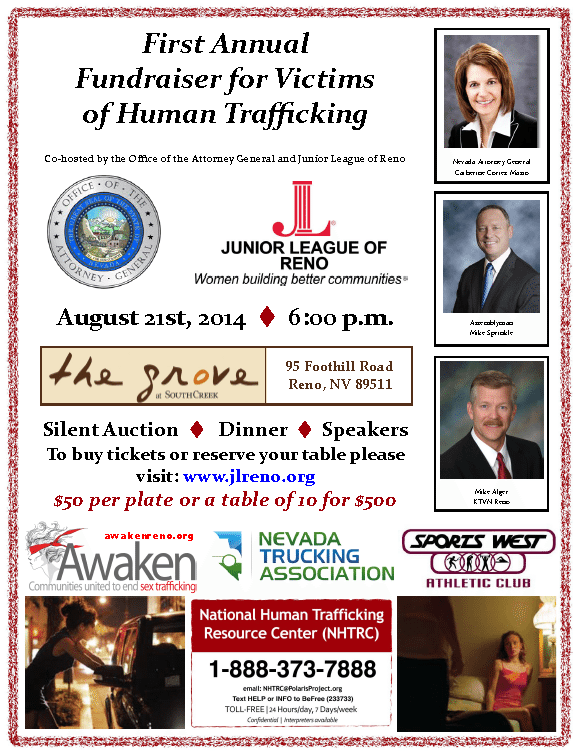 In collaboration with the Office of the Attorney General of the State of Nevada, the Junior League of Reno (JLR) co-hosts the inaugural fundraiser to raise awareness for victims of human trafficking. The event takes place at The Grove at Southcreek on Thursday, August 21 at 6 p.m. and features a silent auction, dinner and guest speakers. Additional sponsors include Awaken, the Nevada Trucking Association, and Sports West Athletic Club.

“The exploitation of trafficking victims should no longer be tolerated in our community and Junior League proudly supports local efforts to combat this issue,” said Jamii Uboldi, president of Junior League of Reno.

“Our organization has worked closely with the State of Nevada to develop new laws that protect victims, enforce stricter punishment of traffickers and make it easier for victims to leave the trade,” Uboldi stated.

Human trafficking has been a long standing issue for communities across the globe and is most recently being brought to the limelight, much in part by local activist groups and the news media. In the state of Nevada, human trafficking is rising. At the same time. with the support of Junior League of Reno’s advocacy support, the issue is being combated.

The inaugural fundraiser brings together community leaders and League members who are dedicated to advocating for and supporting victims of trafficking in Nevada in keeping with the mission of the Junior League to enrich the lives of women and children in northern Nevada.

During the 2013 Nevada legislative year, JLR advocated for AB 67 a bill that changed the law for human traffickers and their victims. The new law authorizes victims of sex trafficking to bring civil action against their perpetrator, increases the penalties for perpetrators, and requires the perpetrator to register as a sex offender.

JLR helped sponsor the local production of Voices in the Life; a play about women working in the sex trade industry, and other sex trafficking documentaries including: Girl Rising and Not My Life.

Additionally, JLR in partnership with Awaken Inc., will host a sex trafficking awareness event under the Reno Arch on January 11, 2015, and will turn off the Reno Arch to symbolize the darkness this issue has brought into our state. Community leaders will address sex trafficking and highlight JLR’s proposed state bill.

For more information about Junior League of Reno and how it supports the local community, visit www.jlreno.org.

Founded in 1978, the Junior League of Reno, a 501(c)3 not-for-profit organization, has a rich history of community involvement. Membership is comprised of a diverse group of female volunteers committed to building a better community through education, advocacy and volunteerism. Members are directly involved in local community projects intended to positively impact women and children. Current projects include the Dick Taylor Universally Accessible Playground, Nevada Discovery Museum, and Kids in the Kitchen. The League also supports local non-profit organizations through grants and service projects.