By ThisIsReno August 14, 2014
Join Holland and the NMA for FOXHOP, a super special film + music event taking place on Saturday August 16 at the Nevada Museum of Art. 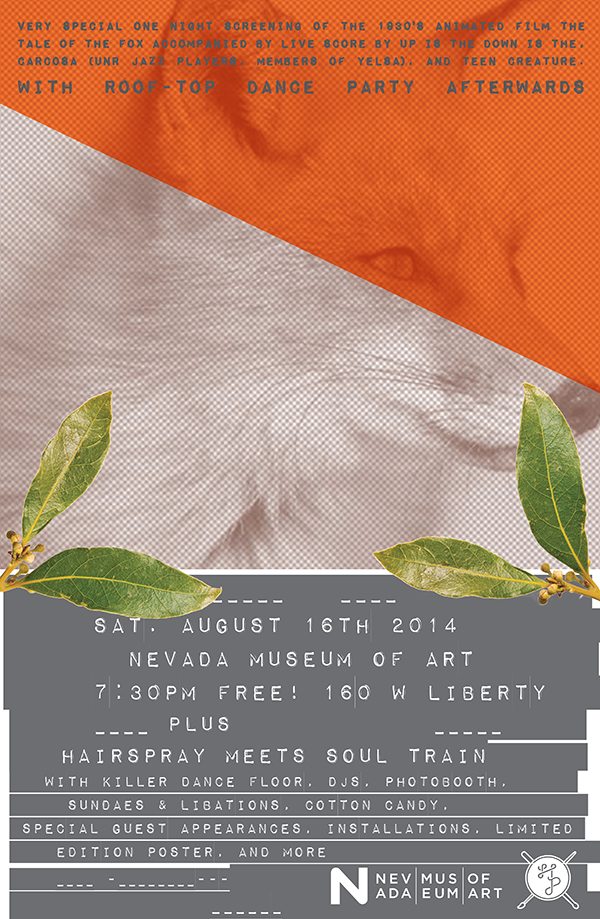 Join Holland and the NMA for FOXHOP, a super special film + music event taking place on Saturday August 16 at the Nevada Museum of Art.

The event features a silent classic film–the incredible The Tale of the Fox (from 1930, it’s one of the very first animated films) with a new, original score from Teen Creature, Up is the Down is the and Carsosa (members of Yelsa) that will be performed live.

Visit Fox before the screening to get a special fortune, partake from the mocktail/cocktail bar, eat some delicious gelato from Bibo Freddo or nab some cotton candy and take home a limited edition poster from UK artists Claire Scully and Stewart Easton.

This event is all free and open to all-ages.

WHERE: The Nevada Museum of Art (160 Liberty Street)
WHEN: Saturday, August 16 at 7 pm
INFO: www.hollandreno.org/events/foxhop

About the film:
Predating Disney’s ‘Snow White and the Seven Dwarfs’ by a good few years, this was one of the very first animated features, with all the characters performed by stop-motion animated puppets. It tells the story of how the crafty Fox runs rings round all the other animals and how the King Lion orders his arrest and imprisonment….though, the Fox has other ideas. Directed by animation pioneer Ladislas Starevich (who created the first ever puppet-animated film in 1912), The Tale of the Fox is a masterful film that paved the way for much of the animation and stop-motion films we know and love today.