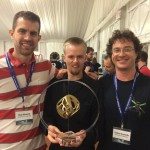 Visual illusions contribute to the understanding of the basic mechanisms of sensory perception. The Dynamic Ebbinghaus illusion begins with a static image of a circle surrounded by a set of circles. The image is transformed into a moving display and, as it moves, it appears the center circle changes size, though it does not.
Blair worked on this illusion for more than a year under the guidance of Assistant Professor of Psychology Gideon Caplovitz and Faculty Research Scientist Ryan Mruczek in the College of Liberal Arts’ Department of Psychology. Caplovitz has helped earn a top-10 spot for a University-submitted illusion in three of the last four years and earned third place in 2006.
“The mission of the contest is to highlight the role of illusions in the study of visual perception and the visual brain and create a bridge of our research to the general public,” Caplovitz said.
Blair and Mruczek work with Caplovitz in the Caplovitz Vision Lab which is partially funded by the Center for Integrative Neuroscience, a multidisciplinary Center of Biomedical Research Excellence (COBRE) grant. Caplovitz is one of five University faculty members who are part of the $10 million grant awarded to the University in 2012 to foster complementary approaches to understanding the brain and neurological disorders. This funding played an important part in creating the best illusion of the year.
According to Caplovitz, the scientific community was drawn to the winning illusion not only because of the large dramatic effect but also because it highlights for the first time the role image-dynamics play in the representation of size in the brain.
“The illusion represents a very important step forward for the theoretical perspective in the field,” Caplovitz said. “And I think the scientific community appreciated that and it was part of the reason that the illusion was selected.”
More than 30 illusions were submitted and the top 10 illusions were chosen on their scientific merit to be presented at the contest in May. The best illusion was chosen by a popular audience vote at the event. The presenters had five minutes to create a visual extravaganza highlighting the illusion. If they go over the allotted time, they are physically removed from the stage.
“In our case, we chose to present the Dynamic Ebbinghous in a Dr. Seuss style poem,” Blair said. “While the illusion itself was very spectacular, I think that people also appreciated humor and entertainment.”
The illusion stems from the classic Ebbinghaus illusion created in the late 1800s. The well-known illusion features a central circle that appears larger or smaller based on the size of the circles around it. The team added motion to the illusion creating the award-winning Dynamic Ebbinghaus effect.
“We found that when we applied motion, it greatly accentuates the effect,” Caplovitz said. “It greatly enhances the magnitude that the target circle appears to change even though it is not changing.”
Some of the biggest names in the vision science field participated in the contest and news about the team’s win has been widely covered by many scientific publications. The competition will be featured in an upcoming issue of Scientific American Mind.
“It is good exposure for the University, for our graduate program, for Chris and it is fun,” Caplovitz said.
Blair says the contest has given him a great platform to continue his research with the brain and with illusions.
“Illusions are so assessable both to the general public and within the visual scientific community,” Blair said. “It has given me this intrinsic connection with anyone who was at the contest.”
To see the winning Dynamic Ebbinghaus illusion visit http://illusionoftheyear.com/2014/the-dynamic-ebbinghaus/. For more about the vision science research at the University, visit http://wolfweb.unr.edu/~gcaplovitz/Caplovitz_Lab/C-Lab.html, and for more information about COBRE, visit http://www.unr.edu/neuroscience.