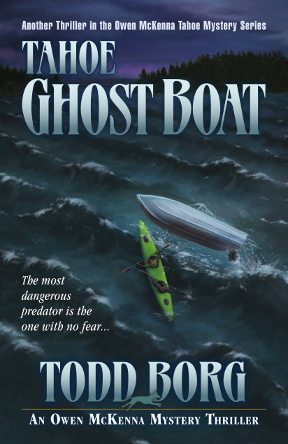 Tahoe Ghost Boat’s protagonist, Gertie O’Leary, is a 15-year-old girl with a messy bird’s nest of red hair, a serious softball pitch, and a dream to be a movie director. She also has a $2 million price on her head.

When a gang led by a killer called Mikhailo The Monster takes Gertie as the centerpiece of an extortion plot, Gertie’s mother calls Tahoe Detective Owen McKenna for help.

McKenna finds out that Gertie’s stepfather has just died in what looks like a boating accident and that Gertie’s mother cares more about not losing money to blackmail than saving her daughter.

McKenna appoints himself her savior. But McKenna is one man up against a small army of twisted murderers whose orders are to kill the girl.

A Tahoe local, Todd Borg is the author of ten previous, acclaimed mysteries set in the Tahoe area. Featuring Tahoe detective Owen McKenna, Borg’s books have won the Ben Franklin Award for “Best Mystery of the Year,” been chosen by Library Journal for their “Top Mysteries of the Year” list and received a starred review, and garnered many other rave reviews in journals and newspapers coast-to-coast.

Blue Moon Pizza is offering a special coupon to everyone who buys a copy of “Tahoe Ghost Boat” the day of the event. The coupon will be good for one free drink with a purchase of one slice of cheese pizza on the afternoon or evening of the event. Blue Moon Pizza is located directly across the street from Sundance Books and Music.