By ThisIsReno Published: July 28, 2014Last Updated on May 22, 2017
StoneyHead Brewing Co. Craft Brewery & Tasting Room announced on their Facebook page today that they will be closing due to the impacts of the COVID-19 pandemic. 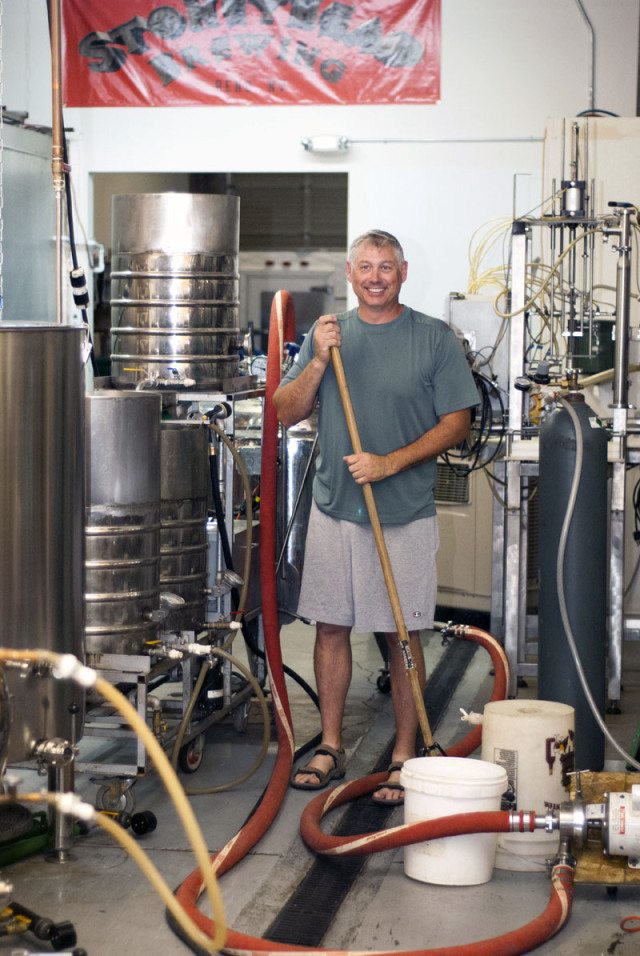 StoneyHead Brewery Owner Paul Michelini stands up to push thick yeast into the floor drain after using nitrogen to push it out of a fermenter.

Paul Michelini’s friend always liked light, malty beers, so when he tried Galena Gold Amber, dry hopped with Cascade hops, he said it was “too stoney!” Later a graphic designer added the image of a moai stone head and the name for StoneyHead Brewing Company was born.

Paul, his girlfriend Michelle Hadley and an intern run the brewery four days a week in a small warehouse hidden behind a business park on Longley Ln. and McCarran Blvd. They brewed the first batch more than a year ago on March 13, 2013 and started bottling immediately. Recently their bottles, which they fill one at a time on a small bottling machine, started selling at Total Wine & More.

StoneyHead brews on a 1-barrel (31 gallon) brewhouse for now, making it the smallest professional brewery in Northern Nevada. They will soon convert the system to a new 3-barrel brewhouse once all the test batches proof out. This qualifies them for the unofficial title of Reno’s only nanobrewery.

A makeshift bar, stand-up tables, a couch and the brewing equipment all occupy a small space inside a warehouse, making StoneyHead a homebrewer’s paradise. Anyone can watch the brewing process a few feet away, touch the equipment on the way through the building and see all the ingredients on the huge shelf in the room.

Paul said it’s hard work keeping the brewery going, something always breaks, but luckily his experience as a handyman keeps the equipment together. Full of dangerous, hot, wet, slippery things, Paul learned a few brewery tricks the hard way after burning his leg with spraying hot water — he now wears rubber boots when mashing in.

He looks a little bewildered as he talks about the business. Once a brewer commits to making beer, it’s difficult to stop unless someone buys all the equipment, he said. When asked what made him decide to open StoneyHead while also working a day job he said, “Because I’m psycho!”

Paul started StoneyHead, like many others, after friends and family told him he made good homebrew. Starting a brewery requires a lot of capital investment and time, and then customers must demand the beer. Breweries exist in a constant state of growing or planning to grow. Every brewery owner talks about the future and what they want to make and where they want their beer to go instead of what’s in the fermenters now. Today’s beer is spoken for but tomorrow’s beer holds possibilities.

Paul wants to eventually expand the brewing capacity to allow distribution in the rest of Nevada, California and Oregon in the next few years. He wants to hire more people to brew once the demand catches up with his vision. And he wants his two sons to work for him too. Unfortunately, one won’t turn 21 until next year and the other is finishing his contract with the military, so for now only the intern and Michelle help out.

This story originally ran on DrinkableReno.com.