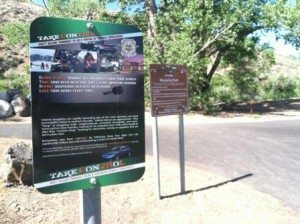 WCSO NEWS —   The Washoe County Sheriff’s Office is intensifying efforts to keep vehicles and valuables safe at County parks and trailheads this summer.

Data from previous years shows a definite increase in vehicle burglaries at parks and trailheads during the busy summer months. In order to reduce those burglaries, the Sheriff’s Office has launched a proactive, summer-long action plan based on the Sheriff’s Take ConTRoL campaign.

“People love to head outdoor during the summer months, spending time on the river, on the trails or in our parks,” Undersheriff Tim Kuzanek said. “Our goal is to create an environment where they can enjoy that time without fear of becoming a victim of crime.”

Sheriff investigators identified a total of 54 vehicle burglaries directly related to County parks and trailheads during the summers of 2011, 2012 and 2013. In order to reduce those numbers during the summer of 2014, the Sheriff’s Office developed a strategy that incorporates increased patrols at those parks and trailheads along with public outreach.

“Vehicle burglaries are crimes of opportunity,” Undersheriff Kuzanek said. “Our strategy is to work in partnership with the public to reduce those opportunities – and therefore reduce the crime.”

Sheriff’s Patrol Deputies have increased their daily presence at County parks and trailheads this summer. Deputies are also taking time to talk with park users about vehicle burglary prevention.

Sheriff’s Office Community Emergency Response Team (CERT) volunteers will also be at different County parks and trailheads at various times between now and the end of summer, providing park users with vehicle burglary prevention information based on the Take ConTRoL campaign.

In an effort to further increase public awareness, the Sheriff’s Office worked with Silver State Barricade and Sign to create metal signs with the Take ConTRoL tips. Thirty signs have already been installed at two dozen designated parks and trailheads in cooperation with the County’s Community Services Department/Regional Parks and Open Space. An additional 30 signs will be installed during the course of the summer.

The key messages of Take ConTRoL are:

C – Clean it Out: remove valuables from your vehicle

T – Take your keys with you. Never leave your car running

L – Lock your doors every time. Sheriff’s Office statistics show that 75 percent of this year’s vehicle burglaries involved vehicles that were left unlocked

The Washoe County Sheriff’s Office is nationally recognized for its data driven approach to reducing crime and increasing public safety in Washoe County. Crime statistics are reviewed weekly and used to proactively fight crime in the region and provide the best possible services to the citizens of our community. For more tips on staying safe year round, visit the Staying Safe page at WashoeSheriff.com.

Anyone who see suspicous activity in any County park or trailhead is encouraged to contact the Washoe County Sheriff’s Office immediately at (775) 785-WCSO (9276).