FROM SWEEP — A lack of state standards and utility incentives for energy efficiency programs in Nevada is hurting the utility’s customers where it counts—in the pocketbook.

According to two reports released July 1 by NV Energy, the utility’s customers in 2013 saved 61% less than they saved as a result of the utility’s programs just four years ago in 2009.  Energy efficiency programs help customers purchase efficient products such as air conditioners, lights and refrigerators that lower energy use and utility bills.

“Households and businesses served by NV Energy are no longer getting robust energy efficiency services from their utility and are paying higher utility bills as a consequence,” said Howard Geller, executive director of the Southwest Energy Efficiency Project (SWEEP), an organization dedicated to the advancement of energy efficiency in the Southwest.

SWEEP urged Nevada policymakers to adopt energy savings requirements known as Energy Efficiency Resource Standards (EERS) to complement Nevada’s highly successful Renewable Portfolio Standards (RPS) in a submission of two bill proposals to the Legislative Committee on Energy.  One proposal called for an EERS and another for incentives that reward the utility for meeting its energy savings standards.

Southwest states including Arizona, Colorado and New Mexico as well as 23 other states already have adopted an EERS. 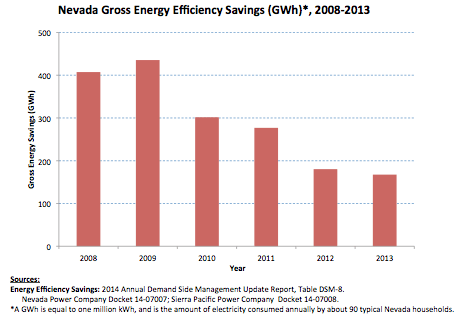 NV Energy’s annual DSM report shows energy savings from efficiency programs way down, 61% in 2013 compared to what they were in 2009.

“Compare customer savings in Nevada to those in neighboring Arizona and you realize the difference that strong energy efficiency goals deliver,” said Howard Geller, executive director of the Southwest Energy Efficiency Project (SWEEP).  “Utility customers in Arizona saved nearly three times as much energy as did NV Energy’s customers in 2013.   Consumers in Nevada could save hundreds of millions of dollars if Nevada also adopted a strong EERS.”

The second proposed bill would provide NV Energy with a financial incentive if the utility achieved the energy savings requirements established by an EERS.

A study published by the American Council for an Energy-Efficient Economy (ACEEE) concluded that every million dollars invested in energy efficiency measures creates a net gain of 10 jobs.

“As our state slowly emerges from the great recession, each of these jobs is important,” noted Polikalas.  “Energy efficiency is vital to a stronger economy, cleaner environment, and brighter future for Nevada.”

In 2009, NV Energy was the regional leader in helping consumers save energy and money and was ranked #16 in the top third of states for energy efficiency in an annual scorecard produced by ACEEE. Five years later in 2013, energy savings from the utility’s efficiency programs were 60 percent less and Nevada ranked #33 in the bottom third of states on the ACEEE scorecard.

Geller called for state leaders to follow the example of other Southwest states and recognize efficiency as the lowest-cost, cleanest and safest energy resource available.